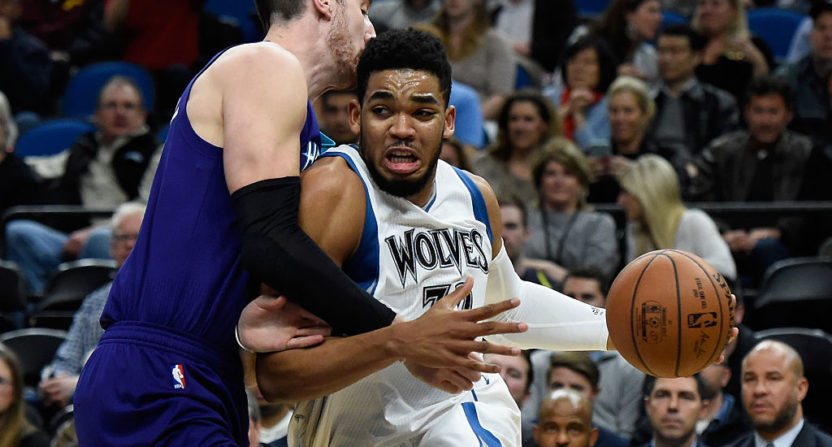 Every time an athlete says or tweets a political opinion, the same response always pops up: “Stick to sports.” But recently, more and more athletes have ignored that suggestion, with Minnesota Timberwolves center Karl-Anthony Towns being the latest.

In an essay for The Player’s Tribune published Friday, Towns expressed not only his outrage at this month’s protests by white supremacists and neo-Nazis in Charlottesville, but also how shocked he was at President Donald Trump’s response:

I was shocked by how our President responded to Charlottesville.

Our President was given a layup: Denounce white supremacists.

And he couldn’t … and wouldn’t.

He missed … he missed badly.

I think about it like this: The President’s response, in basketball terms … ’cause you may know I know a little about the sport … was just like catching the ball on a fast break — no one else is even past half court — and then tripping on your own feet inside the paint as the ball flies out of bounds.

The last year has been a tumultuous time in America, and it seems as though more athletes are spurning the “stick to sports” mantra and voicing their opinions on political and social issues.

Last week, Kevin Durant said he doesn’t respect Trump and would decline any invitation to the White House. In the NFL, wide receiver Anquan Boldin retired over the weekend so he could spend more time fighting for equality, and more and more players are joining the national anthem protests started by Colin Kaepernick last season.

The protests in Charlottesville were an extraordinary event where more people than usual across various professions voiced opinions, and plenty of athletes joined the discussion. LeBron James, who has rarely stuck to sports, implored Americans to create change. Packers veteran Martellus Bennett shunned the “stick to sports” crowd with this all-too-logical quote from the Wisconsin State Journal:

“It’s like saying, ‘You’re a doctor, you have no opinion; you’re a teacher, you have no opinion. You’re a truck driver, we don’t care what you’ve got to say,’ ” Bennett said. “Or, ‘You’re a reporter, why the (expletive) are you writing something about politics, you should stick to sports.’ It makes no sense. … A lot of guys have been programmed for so long that we have to reprogram the youth so that they can think differently.

Trump’s presidential campaign brought many sports figures’ opinions out of the woodwork. Stephen Curry called Trump an ass while coaches Steve Kerr, Gregg Popovich and Stan Van Gundy criticized Trump’s persona and policies time and time again. These are different than the days when Michael Jordan reportedly declined to endorse a democratic Senate candidate because “Republicans buy sneakers, too,” meaning he valued his Nike endorsement deals over political opinions.

The Charlottesville protests have changed the dynamic even further, inspiring more athletes to use their platforms. We can now see the events from two weeks ago were the tipping point for Towns, and they also made Seahawks defensive end Michael Bennett join the national anthem protests.

If you’re part of the stick-to-sports crowd, be prepared for more athletes to continue sharing their non-sports-related opinions.