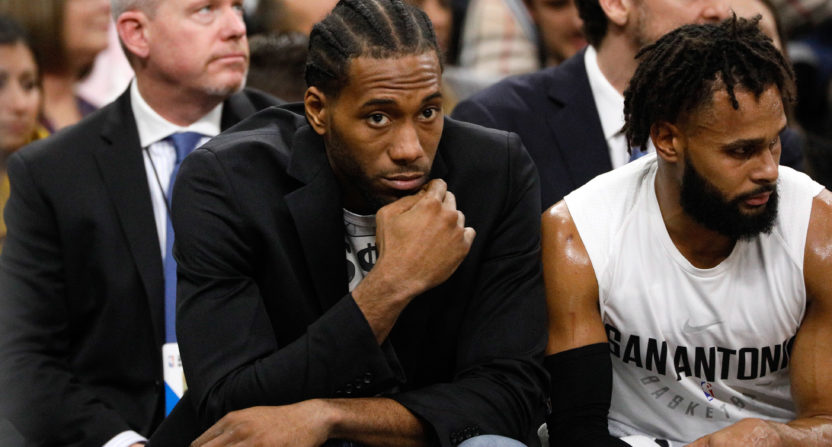 Kawhi Leonard only played in nine games for the Spurs this season, as he battled a quad injury.

That led to a surprising amount of drama, especially when you consider the organization involved. The Spurs have succeeded for decades by, at least to all outward appearances, being a well-oiled, fun-loving basketball machine. It helps when Gregg Popovich is your head coach also the president of the organization; Popovich is almost universally respected in the NBA by players, coaches, media, and fans.

So when Popovich started taking potshots at Kawhi and “his team” of advisers late in the season, it was striking; it’s not that we’ve never imagined any conflict in San Antonio, it’s just that if there’s one team you expect to at least present a unified public front, it’s the Spurs.

Now, with Leonard entering a contract year, both sides are trying to come together for some relationship repair work, according to this report from Jabari Young of the Express-News:

League sources tell the Express-News that head coach Gregg Popovich and Leonard are trying to schedule a meeting, possibly this week, to discuss any issues or concerns Leonard may have, and hopefully come to a decision on offering Leonard the five-year, $219 million supermax extension he is eligible to receive.

Leonard, who is still rehabbing from his quad injury, is close to feeling 100 percent — “He’s at 96, 97 percent,” a source told the Express-News — and anticipates being ready for the start of training camp in September.

That’s unsurprising; Leonard is only 26, and the potential cornerstone of the Spurs franchise going forward. But if he doesn’t want to be there (and if he turns down $219 million, that’s a pretty clear sign that he really, really doesn’t want to be there), Popovich needs to know so they can look at moving him. It’s also a big summer for San Antonio for another reason, as Young notes:

National reports suggest Popovich could seek out a meeting with LeBron James — if he elects to become a free agent — in efforts to sell him on the idea of playing in San Antonio with Leonard.

James has long admired Popovich and if the long-time coach requested a meeting, it’s hard to see James declining.

You can’t make a legitimate offer to LeBron without having everything in order, which makes the timing of this potential Kawhi meeting even more sensible. But regardless of who the Spurs might add, making sure Popovich and Leonard are on the same page is the most important step towards the Spurs contending next season.