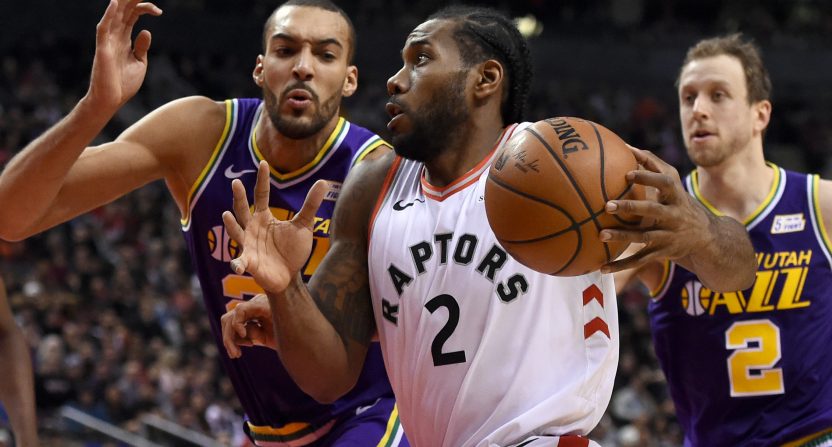 The Kawhi Leonard-DeMar DeRozan trade is working out quite well for the Toronto Raptors. The Raptors own the NBA’s second-best record at 28-11 (a half game behind the Milwaukee Bucks), and Leonard has played like an MVP.

That was evident on Tuesday night, when Leonard scored a career-high 45 points in Toronto’s 122-116 over the Utah Jazz.

Kawhi Leonard has scored 20+ points in a career-best 13 consecutive games.

Leonard was 16-of-22 from the field, and 13-of-17 at the free throw line. And he made zero three-pointers (0-for-3)! That’s a very unique accomplishment, especially for a player that averages 2.3 three-point makes per game. You’d think his career-high in points scored would feature a big night from behind the arc.

The veteran two-way star is now averaging a career-best 26.7 points per game with Toronto. With his prowess on both ends of the floor, and with Toronto a threat to have the NBA’s best record, Leonard should stay in the NBA MVP mix all season. He also may be just what Toronto — annually a good regular-season team — needed to finally make a serious run in the playoffs, after years of disappointment.

Leonard’s special night is followed by what is sure to be another special, emotional game on Thursday- vs the Spurs in San Antonio. It will be Leonard’s first game in San Antonio since the trade.