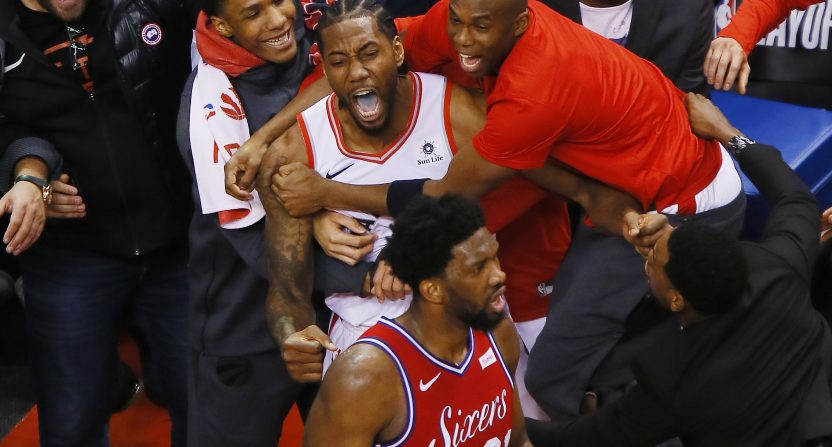 Kawhi Leonard and the Toronto Raptors have eliminated the Philadelphia 76ers in the most dramatic way possible.

With the score tied 90-90 and less than four seconds to go in Game 7 of the second-round series, Leonard hoisted up a long fadeaway from near the three-point line. The ball bounced off the rim multiple times, before rolling in to secure the series-clinching Toronto win.

Kawhi wins it with buzzer-beater in Game 7. WOW! 😱

The shot was freakishly similar to Vince Carter’s miss against the Sixers late in Game 7 from 2001, which happened 18 years ago next week. This time, Raptors fans can breathe easy.

Leonard finished the game with 41 points on 16-39 shooting, adding eight rebounds and three steals. He took over the series for Toronto, coming up clutch in key moments. In Game 7, he nearly singlehandedly thwarted Toronto to victory. As the lead ping-ponged back and forth, a cool and calm Leonard continued to hit shots late. No other Raptors starter scored more than 11 points. Meanwhile, Serge Ibaka had one of his best games of the series off the bench, hitting three three-pointers, pulling down clutch offensive rebounds, and finishing a team-high +22 on the night.

The shot is a tough blow after a promising season for the Sixers. In the loss, a clearly laboring Joel Embiid chipped in 21 points and 11 rebounds, including a late three-pointer to tie the game. Bizarrely, he wasn’t used as an under-the-basket threat. After a rough start, Jimmy Butler made some tough shots, finishing with 16 points on 5-of-14 shooting. Ben Simmons had 13 points, eight rebounds, and five assists. The shortened Sixers bench finished with eight points.

After years of trusting the process, Philadelphia went for it this year, bringing in Jimmy Butler in a mid-season trade with the Minnesota Timberwolves, and adding Tobias Harris in a trade deadline move with the Los Angeles Clippers. Ultimately, they weren’t able to overcome Leonard and the Raptors despite putting up one hell of a fight. The loss was about as dramatic as it gets. Embiid was understandably emotional on his way to the locker room.

Head coach Brett Brown had some wise words for Embiid, saying postgame, “as painful as it feels now, it will help him. It will help shape his career.”

absolutely amazing answer from brett brown when asked about embiid crying after the game and how it will make him stronger pic.twitter.com/yCHPkvGAen

The Raptors will return to the Eastern Conference Finals for the second time in franchise history to face off against Giannis Antetokounmpo and the Milwaukee Bucks. Toronto is still looking for their first NBA Finals berth. What the shot means for Leonard — a pending unrestricted free agent — and his future with the team, is still up in the air. But, there’s little doubt of his impact with the team. Leonard was masterful all series long and was without question the best player on either team.

Meanwhile, the next move for the Sixers is unclear. While there will be plenty of returning talent next season, Harris, Butler (player option), and J.J. Redick are among players to hit free agency. General manager Elton Brand and the organization will have to examine whether a core of Embiid and Simmons can work long-term. While both players are all-world talents, there’s a serious question to answer whether they’re compatible together on a championship contender. Even more unclear is the status of Brown as head coach. According to Marc Stein of ESPN, the Sixers had a Finals-or-bust approach when it came to bringing him back next season.

For the Raptors, Leonard delivered a much-needed shot when it mattered the most, and their championship hopes remain alive. For the Sixers, an uncertain summer begins.