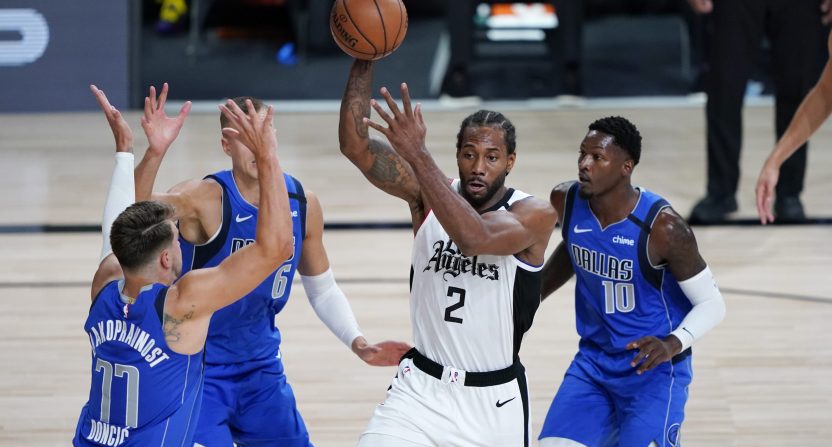 The Los Angeles Clippers rebounded from a Game 2 loss to convincingly beat the Dallas Mavericks 130-122 in Game 3, despite a very poor shooting performance from Paul George. At the helm, again, was Kawhi Leonard, who put the team on his back for much of the night. Leonard played great defense throughout, particularly on Kristaps Porzingis, and finished with 36 points on 13-of-24 shooting from the field, with nine rebounds and eight assists accompanying just two turnovers.

Leonard is playing at a similar level to last year, when he put together one of the best individual playoff runs in NBA history to deliver the Toronto Raptors a championship. He’s doing many of the same things: muscling his way into unstoppable shots, hitting pull-up midrangers, and taking the outside shots available to him. One notable thing we’ve seen from him in this series has been improved passing and distribution. He’s finding players he didn’t always find before.

Leonard has been improving as a passer over the past few years, and we certainly saw him running the offense at a high level in last year’s playoffs. But Game 3 in particular saw him consistently seeking out passes, taking his time in the lane and timing kick-outs perfectly. It adds another dimension to a Clippers offense that already can hit you from multiple angles. If George hadn’t hit just three of 16 shots, Leonard likely would’ve had more than eight assists.

Watching Leonard in Game 3 was almost like watching LeBron James. Leonard was patient with the ball in his hands. Rather than dribbling with the purpose of finding a spot to shoot, he dribbled to disjoint the defense, pulling defenders from shooters and pausing at times to let opportunities open up. Sometimes, his playmaking resulted in his own points, whether a quality midranger or a shot at the rim. Often, though, he found a shooter or a rolling big man.

There’s an art to picking apart NBA defenses, and only a few players have mastered it. It’s not simply vision; it’s also ball-handling, strength, and athleticism, allowing you to shake your man and get the ball to advantageous spots on the court. Leonard has always had the latter three elements. He’s grown more comfortable with his vision, blossoming into a more willing creator as he’s taken bigger roles in offenses. Now, he’s as refined as he’s ever been.

The Clippers run a lot of pick-and-rolls and pick-and-pops, incorporating every player on the court. Players not involved in the action are usually threatening perimeter shooters and savvy cutters. Leonard is the perfect driver of that offense. He wields his gravity as a weapon, sensing when a help defender is lurking too much off a shooter:

Tim Hardaway Jr. was already hedging into the lane to guard the Kawhi-Ivica Zubac pick-and-roll as Leonard came off the screen. It took only one purposeful dribble for Leonard to register Hardaway’s movement and hit Shamet for a three. That may seem like an easy assist, but timing is everything on that play. Dribble further into the lane, and the window to a Shamet pass tightens. The Mavericks could have rotated and made things more difficult. Leonard was ready before any of those problems occurred.

That’s filthy. He comes off the switch with Seth Curry, a weaker defender, on him and recognizes that the space is going to be on the left side of the court. He dusts a swiping Curry with one dribble, maneuvers slightly into the lane, and hits Reggie Jackson for a wide open three. Sometimes, it’s not merely the passing vision that creates shots. It’s the dribbling and moving with the ball in clever ways. It’s awareness combined with on-ball skill and poise.

In the regular season, he jumped from averaging 3.3 assists per game to averaging 4.9. He hasn’t transformed into a LeBron or Luka Doncic-level passer, but he is sensing more and more quality looks, and he’s using his court vision to find himself shots as well. He knows when his defender is overmatched, and he knows when to be patient with the ball in his hands.

Watch how he hesitates on this drive, freezing the other defenders:

Boban Marjanovic’s lead-footed rim protection was certainly exposed here, but Leonard methodically took out the Mavs’ defense en route to a good shot at the rim. Coming off the screen, he hop-steps a tad before accelerating, putting the corner defender (Trey Burke) in a bind as he worries about Lou Williams. Once he senses the opportunity, Leonard bounds toward the rim through a hapless Marjanovic.

Vision manifests in different ways on the basketball court. We still don’t see the precise cross-court skip passes all the time like we do from LeBron and Luka, and sometimes Leonard flails in the air before finding the guy nearest to him. (He can resemble Michael Jordan when he does that, actually.) But Leonard’s playoff dominance comes from more than his pure upper-body strength and elegant midrange game. Like all upper-tier elites, he brings a certain nuance to his skillset, and we’re seeing it show up more and more.

This level of Kawhi will be hard to beat in a playoff series, particularly once George starts finding his shot. Leonard is still improving. That should be scary for the rest of the NBA.