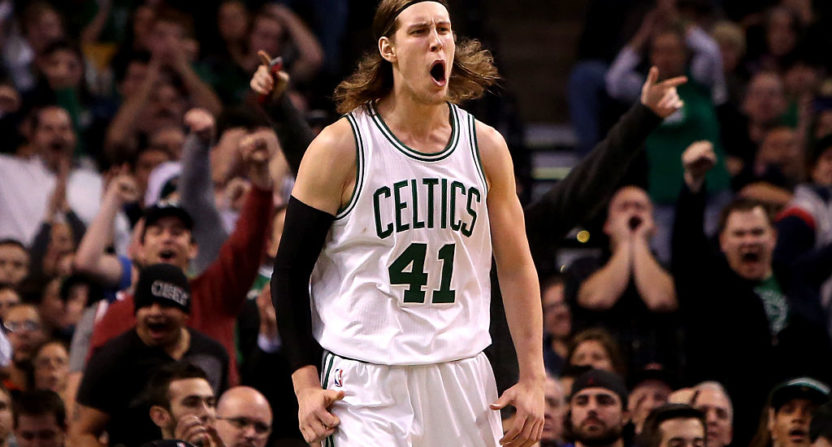 Boston Celtics backup center Kelly Olynyk has had a few solid games in the playoffs, but he also had just four points in Game 6 on Friday. And one point in Game 3.

On Monday, Olynyk was already having a very strong performance with 14 points through the first 40 minutes. But the final 7:09 made this The Kelly Olynyk Game.

Was going to send a clever tweet about this being forever known as the “Kelly Olynyk Game” then saw this on my timeline. pic.twitter.com/ig0j1uFMY3

Let’s set it up. After Celtics guard Isaiah Thomas’ three with 10 minutes left gave Boston a 94-81 lead, their offense hit a lull. Wizards sharpshooter Bradley Beal started cooking, and Washington cut the lead to 96-90 in a couple of minutes.

Then this guy stepped in.

Olynyk was averaging nine points per game in the playoffs, but he scored 12 points in a four-minute stretch to clinch the Celtics’ first Eastern Conference Finals appearance since 2012. He made a pair of threes and a couple of layups, including one that danced all around the rim before dropping.

Olynyk subbed out with 26 points off the bench (the Wizards entire bench combined for just five), and the Celtics went on to win 115-105.

That’s one way to get your name trending on Twitter.

Kelly Olynyk is dead and was replaced by a look alike: a conspiracy theory thread pic.twitter.com/Igk9WOpmYx

Throwback to the last time Kelly Olynyk cooked this much https://t.co/olPD5lDzIc pic.twitter.com/iHSsMV0s64

Wow wizards- game 7 and you let OLYNYK who looks like he'd be a main character in charlottes Webb beast y'all. Now bron can't come here

Now the Celtics move on to face the Cavs in the Eastern Conference Finals, which begin on Wednesday. We’ll see if Olynyk has any more magic in him. Boston may need it to conquer Playoff LeBron.