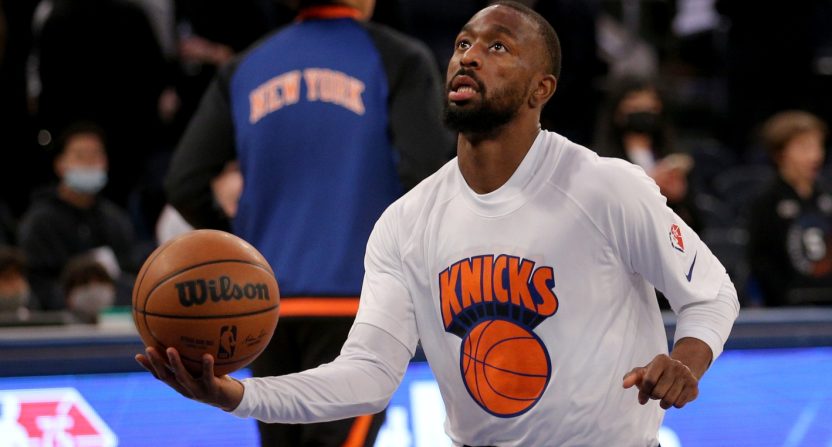 The New York Knicks came into the 2021-2022 NBA season with the kind of hype they haven’t had as a franchise in a long time. And so far, the results have been…okay. Head coach Tom Thibodeau is making a personnel change that he hopes can spark something better.

Thibodeau announced Monday that Alec Burks will now be a full-time starter for the Knicks, following a 23-point performance on Sunday. He also announced that Kemba Walker will be out of the rotation altogether, beginning with Tuesday’s game against the Brooklyn Nets.

Kemba Walker is out of the Knicks rotation “as of right now,” Tom Thibodeau says. He says he will tighten the rotation moving forward. “It would be tough to play three small guards together,” Thibodeau says. Says he has great respect for Walker and all he’s accomplished.

“I just don’t like the way we’ve been trending, the inconsistency of our team and we’re gonna try to make a change,” Thibodeau said. “I want to get bigger…I want our defense to be more intact. So basically that was it I got to do something different.”

Tom Thibodeau says, at the moment, PG Kemba Walker is not part of the NYK rotation. Says he views Walker as a starter & doesn’t see good fit for Walker off bench. “I have great respect for who Kemba is as a person… & all he's accomplished in this league." pic.twitter.com/O4X3CItepg

The 31-year-old Bronx native signed a two-year deal for $18 million this past summer to play for the Knicks. So far, Walker has averaged 11.7 points in 24.5 minutes per game, both career lows for the four-time NBA All-Star.

Meanwhile, Burke is averaging 10.5 points in 22.3 minutes per game, both numbers that are likely to rise with his new role and without Walker in the lineup.

NBA folks and Knicks fans certainly had some strong opinions about the announcement and what it likely means for Kemba’s time in New York.

Wouldn't be surprised if this isn't permanent, but def necessary right now. It's pretty obvious there's some big time fit issues with Kemba and the rest of the roster. More IQ is a good thing too https://t.co/sTo6rP4h2i

I hate this for Kemba because I was hoping it would've worked out for him in his hometown. But it had to be done. The injuries he's suffered since leaving the Hornets have caught up with him. At least Charlotte fans never had to watch this version. https://t.co/lPcHwXqzWy

Kemba Walker ain’t been right since he left Charlotte https://t.co/F8d4wO4JnD

kemba was a gamble worth taking but they call it gambling bc you mostly lose. "great respect for all he's accomplished" reads like "it's over." https://t.co/alAB2jAGZR

We’ll have to wait and see what’s next for Walker and the Knicks. Kemba came to the Knicks after agreeing to a buyout with the Oklahoma City Thunder this past summer, and perhaps he’ll be doing something similar in a short amount of time here as well.