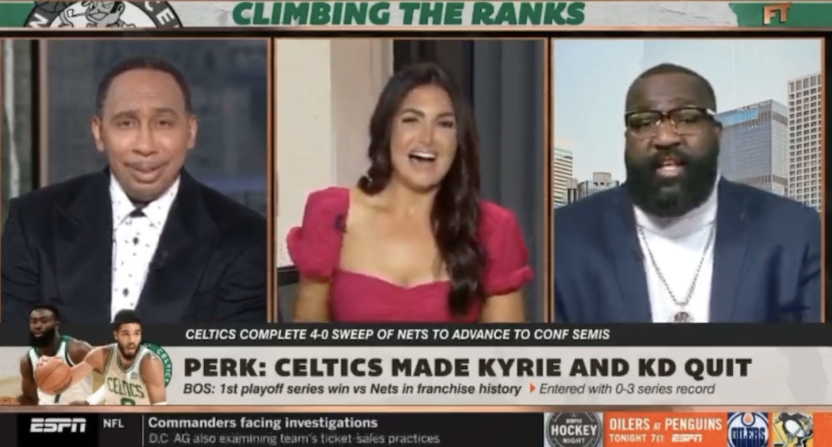 Ben Simmons has done the impossible. He’s created a scenario in which there will be back-to-back NBA offseasons full of scorching hot takes about him despite not playing in one game this entire season. It’s impressive in its own way.

The mercurial Simmons, who was traded from the Philadelphia 76ers during the season but never suited up for the Brooklyn Nets before they were swept out of the NBA Playoffs, has become a lightning rod of criticism and critiques due to the various reasons, reports, and rumors surrounding why he hasn’t played since last year.

There have been reports of back issues, mental issues, general health concerns, vague issues, and more. There have also been rolling deadlines and return dates that came and went all year long. The whole thing has left a lot of NBA pundits wondering what to make of Simmons and his situation.

ESPN’s Kendrick Perkins has a unique take on the 25-year-old NBA star, saying on First Take that he is like a pretty girl who smokes cigarettes.

"Ben Simmons is that pretty girl that's single and everybody's wondering why she's single. Because she smokes cigarettes. That's who Ben Simmons is." – Kendrick Perkins 🤔 pic.twitter.com/AFEgWZE20W

A very confused and bemused Stephen A. Smith and Molly Qerim asked for some clarification and Perkins put spelled out his unusual analogy a bit more.

“Everybody see Ben Simmons and they say ‘oh, this is who he is. His upside. He has the physique, the body, the athleticism. But we don’t know if he love the game of basketball,” said Perkins. “So my thing is, when he goes to the organization and things of that nature, people start realizing who the hell Ben Simmons is.

“Like, for example, the Brooklyn Nets, when they pulled the trigger, they wondered why the Philadelphia 76ers didn’t want that pretty girl no more. They got him and then they realized. I don’t want him. This is why. He come up with an excuse. Yes, he has the physical talent and the physical gifts, but he don’t love the game of basketball.”

That is…quite the breakdown. There’s a lot going on here and it feels like a strong oversimplification of a more nuanced discussion around mental health and other issues. But hey, ESPN doesn’t pay Kendrick for nuance. They pay him to compare NBA stars to girls with nicotine addictions.

Just imagine what wild Ben Simmons takes ahead of us this offseason if this is where we’re at.