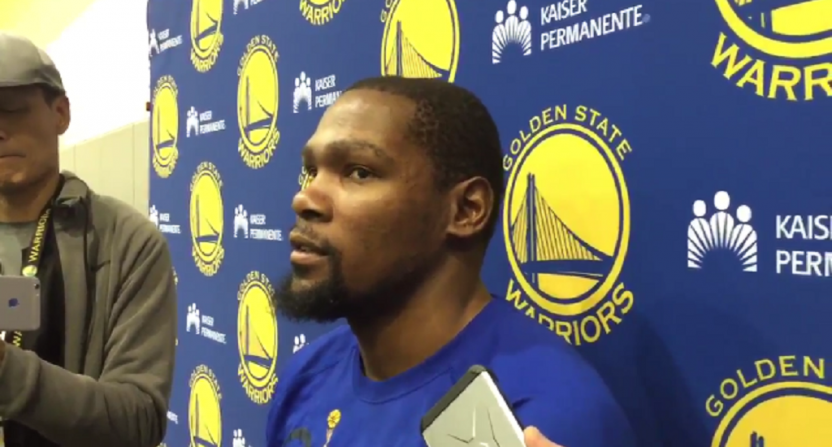 After Stephen A. Smith’s character assassination of Kevin Durant on Monday’s First Take, the Warriors star took the high road, apologizing for comments that incensed some fans but choosing not to retaliate against Smith.

After Game 3 of the Western Conference Finals, a reporter asked Durant about the overabundance of blowouts in this postseason and how it’s making the playoffs less entertaining. Durant responded: “If you don’t like it, don’t watch it.”

That understandably upset some people, although Smith went completely off the walls on Monday. Even though he usually never exaggerates…

Prior to Game 4, Durant apologized for any disrespect, but stood by his general sentiment that fans should “just turn it off” if the game bores them. From ESPN’s Chris Haynes:

“I mean, life can be simple, man,” Durant told ESPN. “If you don’t like the way the game is going, just turn it off. If you’re enjoying it, just keep it on. Life is simple. I didn’t mean it to disrespect anybody, but if you felt disrespected, I’m sorry. But if you don’t enjoy the game, turn it off [and] turn something else on. If you do, enjoy the rest of it, man.”

The Warriors went on to sweep the series in another mostly uncompetitive game Monday where they led by double digits for the final 31 minutes. Hopefully we’ll be able to take a break from this “blowout” storyline next series when the Warriors face the Cavs.

Even though Smith called Durant disrespectful, arrogant and dismissive of fans, Durant spent time before Game 4 signing autographs and posing for photos with fans in San Antonio.