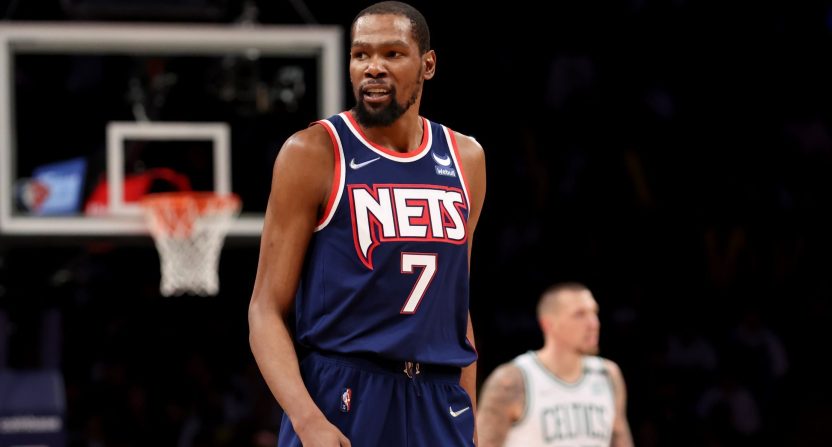 The Brooklyn Nets’ season came to an end on Monday night as they lost to the Boston Celtics in Game 4 of their first-round matchup.

It was a shocking result to some who didn’t expect the Celtics to win the series, much less sweep a team with massive star power like Kevin Durant and Kyrie Irving.

The Nets, and in particular Durant, have received a ton of criticism overnight for their disappointing performance in this series. Former NBA player and current media personality Charles Barkley has certainly had plenty to say about Durant throughout the series.

"If you ain't driving the bus, don't walk around talkin' bout you a champion!"

“Please don’t tell me you’re a great great player when you are averaging 20,” said Barkley on Sunday. “I don’t think I ever played in the playoffs and averaged 20.”

His co-host Ernie Johnson then asked Barkley whether or not Durant is a great player in his eyes despite being mostly held in check by Boston for the majority of the series.

“Let me tell you something, I don’t want to bad mouth the dude. You guys always talk about that championship stuff. I try to tell y’all, all these bus-riders, they don’t mean nothing to me. If you ain’t driving the bus, don’t go around talking about you a champion. If you are riding the bus, I don’t want to hear it.”

Barkley is clearly referencing the two championships that Durant won as a part of the Golden State Warriors alongside Stephen Curry and Klay Thompson in the past.

Durant heard Barkley loud and clear, as he posted a number of pictures of Barkley while he was on the Houston Rockets in a situation similar to today’s “super teams.” One picture was captioned, “Where would Chuck be without the big homies.”

The beef between the two certainly has the NBA world talking.

Some are on the side of Charles Barkley and believe that Durant took the easy way out by joining Golden State and may not be able to win a championship on his own.

Charles Barkley was right, Kevin Durant wasn't the bus driver for the Warriors, otherwise he'd be able to drive another team to a championship.

Others think that Barkley is being far too critical of Durant and that the Nets just didn’t have what it takes to get by a very talented Boston Celtics team.

Charles Barkley. You can’t call KD a “bus rider” when he had two back-to-back Final’s MVPs.

You just can’t do that.

Charles Barkley wasn’t half the player KD was. And Barkley *tried* to ride the bus twice. He demanded trades to Houston and Phoenix … just never good enough to win a title 🤷🏽‍♂️ https://t.co/w8ACtgLGzO

Regardless of who is right or wrong, Durant will have plenty of time this offseason to argue with the masses on social media who are criticizing him while the Celtics advance to the second round of the playoffs.