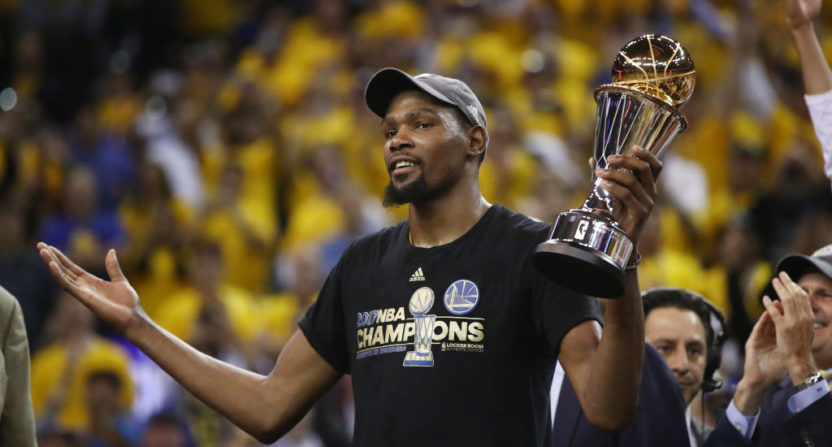 When Kevin Durant signed with the Warriors last summer, he infuriated NBA fans by saying the move to Golden State, which had just won an NBA-record 73 games and lost the Finals in seven games, was “the hardest road” to winning his first championship.

Durant says this is "the hardest road," not the easiest to a championship.

Well, Durant got that first championship on Monday, and it didn’t seem too hard. The Warriors won 67 games even though Durant missed six weeks late in the regular season. Then they went 16-1 in the playoffs, beating the Cavs for the title in five games despite an historic performance by LeBron James.

Even so, Durant stood by his assessment from last summer when he joined The Bill Simmons Podcast on Wednesday:

“We put in work, man. Stop telling that it wasn’t earned or we didn’t work for it, man. We were the most disciplined team all year, we preached teamwork and togetherness all season, and it’s hard to do that with a bunch of egos in the league, and we peaked at the perfect time.

We got better when I got hurt. We struggled at first, then, as a smart team does, that plays together, that’s unpredictable out there, they figured it out, and when I was hurt, they took it to another level. And then when I came back, we just kept going from there.

But we were disciplined, we had a message everyday – it was always just about us.”

I want to like Durant so badly because he’s just so frickin’ good on the basketball court. But seriously? I don’t quite agree with what Stephen A. Smith thinks about him, but I am getting tired of hearing him talk.

The Warriors won 73 games last season. They were possibly the best team of all-time and certainly the best of the last 20 years. Anybody who signs a two-year deal with an opt out after the first season is taking the easy road. The only road that may have been easier was joining LeBron in Cleveland, and even that’s arguable.

Durant deserves this championship. So many basketball analysts and fans judge superstars based on how many titles they win, and Durant, at 27 years old last summer, still had none. Everything he did was within the rules, and then he completely dominated the NBA Finals on both ends of the floor in a stunning performance.

And I trust Durant when he says the Warriors worked hard to create chemistry and put the team ahead of their egos. But every team has to do that to win a title. It’s just that the other 29 don’t have the benefit of playing four superstars.