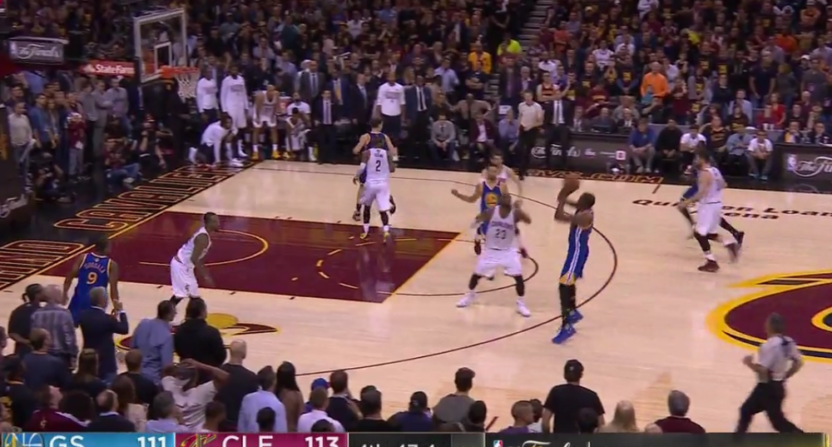 After the Golden State Warriors won the first two games of the NBA Finals 113-91 and 132-113, many figured they’d blow out the Cleveland Cavaliers the rest of the way. That didn’t happen Wednesday night, as the Warriors came extremely close to losing Game Three thanks to tremendous performances from Cleveland’s LeBron James and Kyrie Irving, and trailed inside the final minute. Kevin Durant was crucial to their final comeback, though, making key play after key play down the stretch, including this defensive rebound, drive and unassisted three-pointer to give Golden State a 114-113 lead with less than 46 seconds left:

After a Cleveland miss, Durant then hit a couple of clutch free throws to extend the lead to three points, and Andre Iguodala’s excellent defense to force a turnover combined with two free throws from Steph Curry to seal it and give the Warriors a 118-113 victory. But it was Durant who was perhaps the most crucial, finishing with a team-high 31 points (on 10-of-18 shooting) with eight rebounds and four assists. Curry (26 points, 13 rebounds), Klay Thompson (30 points, six rebounds) and others helped too, but Durant’s performance overall and in the final minutes was just amazing.

Durant’s game also stood out because of the tremendous showings that the Cavs got from Irving and James. Irving finished with 38 points, six rebounds and three assists, while James had 39, 11 and nine. They both had ridiculous highlights, with even a missed pass from James going in and Irving pulling off an incredible one-on-four drive. But in the end, Durant managed to make the difference for the Warriors, with this series’ most prominent new figure providing a big change from how this went last year. We’ll see how this goes from here, but it certainly doesn’t look good for the Cavs, and Durant’s a huge part of the reason why.