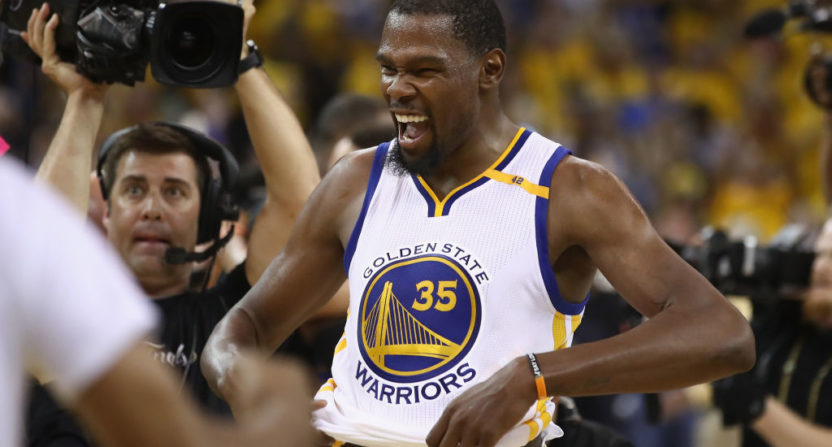 There will be no blown 3-1 lead this year. After falling 137-116 in Game Four of the NBA Finals Friday, the Golden State Warriors rebounded to beat the Cleveland Cavaliers 129-120 in Game Five Monday to clinch the NBA championship. And the largest part of the reason why might have been someone they didn’t have in last year’s Finals; NBA Finals MVP Kevin Durant.

Durant had already been vital in this series, especially in Game Three where he had 31 points, eight rebounds and several massive plays down the stretch to lead a late comeback. He then had another great night Monday, recording a team-high 39 points (on 14-of-20 shooting, no less) while adding seven rebounds and five assists. On the whole, Durant averaged 35.2 points, 8.4 rebounds and 5.4 assists for the Finals, and he was a massive part of why this year’s Warriors-Cavs contest turned out differently. Here are the final moments of the game and the Oracle Arena crowd going wild:

Durant celebrated with his mom Wanda, then with Steph Curry:

He also gave an emotional interview afterwards, after speaking with his mom first:

This was quite the moment for the Warriors, and quite the moment for Durant. He took plenty of criticism for joining the Warriors this year, and some even questioned if they needed him, but it certainly worked out for both sides in the end. Durant was perhaps more vital to their Finals win than anyone else, and he finally got his first championship.

But Cavaliers’ fans have a heck of a season to be proud of too, and some of them did get one benefit Monday. Thanks to a late three, the Cavs wound up with a push, so those who bet on them at +9 didn’t lose. That’s small consolation, but it’s something. It’s the Warriors’ fans and Durant who are going to be really happy, though.