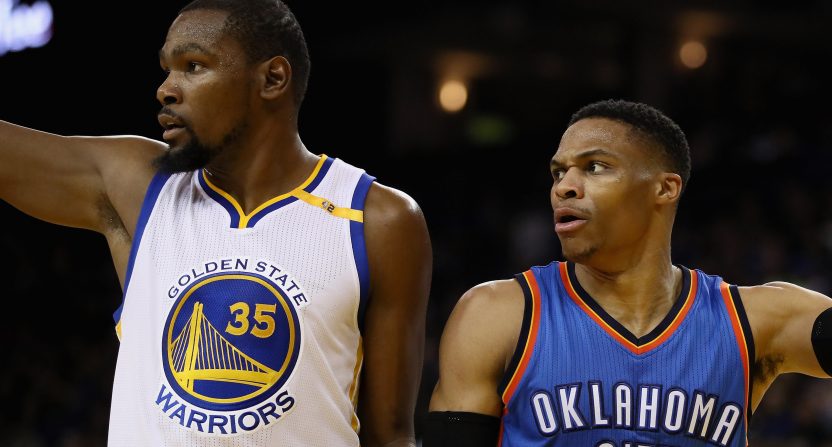 Even with Kevin Durant out with a knee injury, his feud with Russell Westbrook remains one of the biggest NBA storylines. As you may have heard, Durant and Westbrook spent eight seasons together with the Thunder before Durant left for the Warriors last summer.

Of course, that was right after the Warriors knocked out the Thunder in an epic Western Conference Finals.

On Friday’s episode of The Bill Simmons podcast, Durant said he and Westbrook never even acknowledged each other during the first Warriors-Thunder game this season:

The feud was somewhat inevitable, as Westbrook came out and said he was “angry and hurt” soon after Durant’s departure. But Durant thinks things would be less awkward if the media stopped asking about it so much.

Here’s what Durant said on the podcast about the media’s role, as transcribed by The Oklahoman:

“Yeah, I can’t lie. It is [strange]. Because we spent some time together. And I understand who I left to go to and what happened and all this stuff. And then on top of that, to me, I don’t really think he got a problem. I don’t really think it’s — but if you ask a man every single day about me, I would be pissed, too…So I think that’s what added to this feud or this beef that we have, which is all manufactured.

“Yeah, it was like — everybody wants to know, every news outlet wanted to know. And it was, like, you want to know about two grown men’s conversation and their relationship.”

Durant and Westbrook reunited as teammate in last month’s All-Star Game. They even connected for an alley-oop, but it didn’t do much to relieve the tension. Durant said the whole thing was pretty awkward, large because of the media.

“It was. It was awkward. Everybody see it. Everybody talked about it. The whole time that was the topic of discussion. It was ‘Who’s getting traded and are they talking to each other?’ It was corny. It’s tabloid, TMZ talk. It’s not even basketball. It’s not even what’s important in this game.”

“I never even told nobody this. I wanted to ask Russell, like, ‘How’s your family doing, man? How you feel?’ Stuff that normal people talk about. But there’s so many cameras watching and it’s ‘Oh, what’d they talk about? They didn’t look at each other. They didn’t even say hi.’ It was just making me so mad.”

Durant makes some good points. But at the same time, as a high-profile NBA player, you can’t expect to leave a franchise after almost a decade for a team that just broke the single-season wins record and knocked you out of the playoffs without facing criticism. It’s not all the media’s fault, and he’s been covered more favorably than LeBron James was when he went to Miami, for example.

He’s got to own this.

[The Bill Simmons Podcast | The Oklahoman]