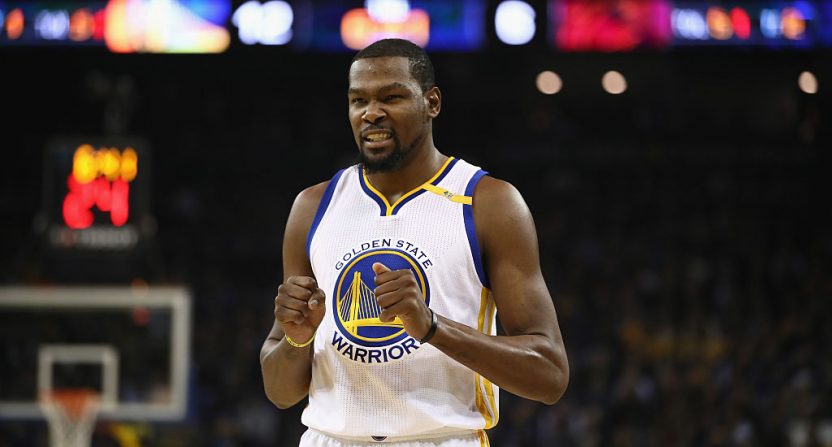 Kevin Durant and the Golden State Warriors may have a dodged a figurative bullet.

After suffering a nasty-looking knee injury in the first quarter of Golden State’s 112-108 loss to the Washington Wizards on Tuesday, the worst was feared for Durant. Zaza Pachulia had landed on Durant’s left leg while trying to get a rebound, forcing the Warriors All-Star forward to immediately leave the game and he did not return. However, after undergoing an MRI, Durant’s prognosis isn’t all that grim.

On Wednesday, the Warriors announced that Durant “suffered a Grade 2 MCL strain and a tibial bone bruise.” There is no specific timetable for his return, but Durant will be re-evaluated in four weeks. The Warriors also said in their release that there is a chance he could return before the end of the regular season.

Overall, this is great news for the Warriors, especially since Durant isn’t lost for the rest of the year and does not need surgery. There are only six weeks left in the regular season, so if Durant’s re-evaluation goes swimmingly, then he will have some time before the start of the NBA Playoffs to get back into the flow of things. And if he needs more time to recover, the Warriors should be just fine without him at the start of the postseason. A first-round matchup against the current eighth-seeded Denver Nuggets shouldn’t pose that great of a threat for the Warriors, even without Durant.

Without Durant, of course, Golden State’s firm grasp on the No. 1 seed in the West does lessen a bit. The Warriors are just four games above the Spurs right now and with Golden State wanting to rest their star players before the postseason, there is a slim chance San Antonio could catch up to them. If that happens, it means the Warriors would more than likely face Russell Westbrook and the Thunder in the first round, a much more difficult matchup than the Nuggets, yet one they would still be favored to win.

But the Warriors still should finish first in the West. Half of their remaining games are against sub .500 teams and let’s not forget that they have three other All-Stars in Stephen Curry, Klay Thompson and Draymond Green. With back-to-back MVPs on his shelf, Curry is in his league of his own as well. Plus, both Curry and Thompson’s scoring output will only increase now that Durant is out. The same can be said of Green, who has taken a lesser role on offense than in years past because of Durant. Overall, though, Golden State’s offense won’t likely miss a beat, thanks to Curry and Thompson.

"It's a dream come true! I feel like I helped start something in '07 & now I'm coming back to help finish it,"Matt Barnes on Warriors return

Also, the Warriors will reportedly add some depth at the wing by signing Matt Barnes, who is a bit past his prime but a fine player in limited minutes.

Durant is averaging 25.3 points, 8.2 rebounds and 4.8 assists and a key part of the Warriors. But with Andre Iguodala, Thompson and Barnes, the Warriors have enough to hold down the small forward spot until he returns.

However, the Warriors will miss Durant on the defensive end of the court, Durant has made strides on the defensive side this season and is leading the Warriors in blocked shots and rebounds. He has become one of Golden State’s lone rim protectors and has really embraced the challenges of guarding opposing centers or power forwards. The Warriors have the second-best defense in the league and while Green likely gets a lot of the credit, Durant also deserves some shine for his defensive effort.

Durant shouldn’t feel need to rush back. He needs to be at 100 percent if the Warriors want to win the NBA championship. This was Durant’s main goal when he signed with Golden State in the offseason and there is no need for him to jeopardize that by not returning until he’s fully healthy. The Warriors don’t want the same thing that happened with Curry during last year’s playoffs — where he played at less than full health after injuring his knee in the first round — to occur with Durant.

The loss of a superstar like Durant will definitely impact the Warriors. But with Curry, Thompson and Green, Golden State has some serious talent to weather his absence. And if Durant is indeed able to return after being re-evaluated in four weeks, then this could turn out to be just a minor bump in Golden State’s stellar season.