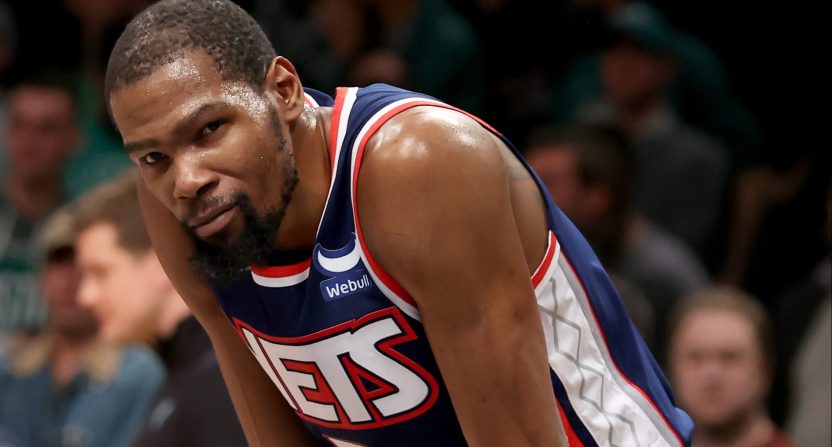 As the standoff between Kevin Durant and the Brooklyn Nets continues, a new possible outcome has emerged for the NBA superstar’s future, retirement.

The longer it takes for the Nets to honor Durant’s trade request, the more some within the NBA community have assumed he’ll ultimately remain in Brooklyn. But according to NBA Insider Marc Stein, Durant will retire before wearing a Brooklyn Nets uniform again.

“During summer league in Las Vegas, one of the most well-connected team executives I speak to regularly insisted to me that, based on what he was hearing, Kevin Durant was more apt to retire than play again for the Brooklyn Nets. This was in early July,” Stein wrote for his Substack.

“I told the tipster that I simply couldn’t believe that,” Stein continued. “I was a loyal subscriber to the theory that Durant The Hooper loves playing basketball way too much to adopt such a stance.

“Now? More than a month later? Attaching the R-word to Durant still comes across as serious hyperbole, but it is certainly getting easier to envision him refusing to report to training camp when the Nets get back together in six weeks for Media Day (Sept. 26) and their first practices of the new season (Sept. 27).”

Last week, Durant reportedly told Nets owner Joe Tsai he would stay in Brooklyn if they fire general manager Sean Marks and head coach Steve Nash. It seemed like a ploy attempting to put increased pressure on Brooklyn to find a trade partner for the 33-year-old superstar. Durant knew Tsai couldn’t lose credibility by firing the team’s coach and GM at his request. Durant also knew the Nets couldn’t create a dysfunctional situation by forcing him to play under the leadership he just requested to be fired.

The Nets reportedly have multiple trade offers for Durant on the table, including one to the Boston Celtics centered around All-Star guard Jaylen Brown. In an effort to speed up the process and reaffirm his refusal to play in Brooklyn, threatening retirement seems like another ploy. If he retires, the Nets would lose their best asset and get nothing in return, while Durant would be walking away from $198 million. NBA fans have come to grips with the fact that Durant wants out of Brooklyn, but most of them aren’t buying the fact that he’s mulling retirement, despite Stein’s recent report.

Kevin Durant, continuing to start small fires in garbage cans around the building because baby, this is how you make the sausage. https://t.co/7FMzB9tusu

Stephen A is back at work, we can just get the trade over with already https://t.co/C0HQrRd5KV

This would be hilarious, but don’t hold your breath. https://t.co/H4t6A2zorP

Gimme a break with this nonsense https://t.co/VPerJigA5S

“Willing to retire,” would be an all-time bluff if this was an equal playing field but KD was always going to get a trade if he wanted a trade.