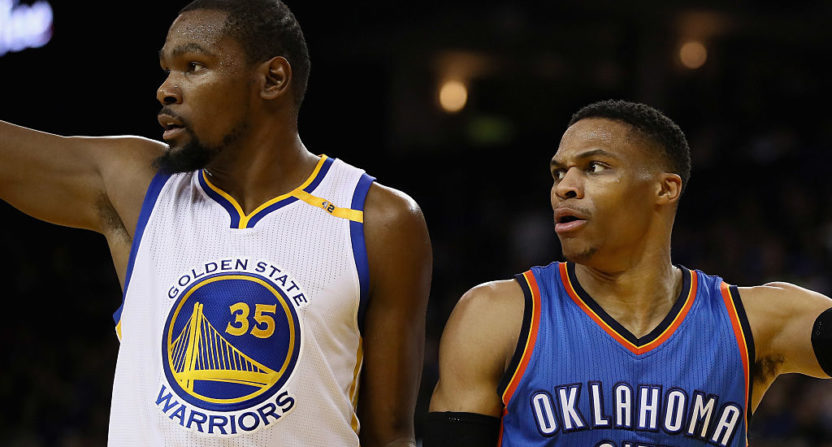 Kevin Durant has found himself in quite an offseason whirlwind after he was caught apparently using alternate Twitter accounts to defend himself and his controversial decision to leave Oklahoma City and sign with the Warriors last summer.

In third-person tweets from his own account, Durant wrote that he left OKC because of issues with the Thunder organization and a desire to get away from Thunder coach Billy Donovan and an underwhelming roster.

After apologizing during a TechCrunch panel about athletes and branding, Durant elaborated to USA Today’s Sam Amick, saying he hasn’t slept or eaten in two days because he feels so bad about bashing Donovan and the Thunder:

“I played a little too much, and that (expletive) really hurt me. To know that I affected Billy Donovan and the Thunder – like I love those people and I don’t never (want to hurt them).

“That was just me being a total (expletive) idiot. I own up to it. I want to move on from it. It probably hit me probably harder than what everybody (thought). Everybody else was telling me to relax, to snap out of it, but I was really, really upset with myself more than anything. It’s not the fact that people were talking about me, because I deserve that, but I’m just more upset with myself that I let myself go that far, you know what I was saying? It was a joke to me at first. I was doing it all summer, and it went too deep. I went too hard… I haven’t slept in two days, two nights. I haven’t ate. It’s crazy, because I feel so (expletive) pissed at myself and I’m mad that I brought someone into it.”

And here is Durant’s original apology:

Although Durant has repeatedly claimed there’s no bad blood between him and the Thunder organization or any of his former teammates — he’s even shown a sense of humor about it — there have been a few signs that the wounds go deeper. Just a few weeks ago, he released a new shoe that reignited an old feud with Russell Westbrook.

And although the tweets in question were written in third-person, Durant insisted he does not have an alternate account:

As for the suspicions that he meant to send the tweets from some sort of secret account, he swears that’s not the case.

“No, (there’s) no different account,” he said. “I was just on there talking. It kind of looked that way – it did kind of look that way.”

And truth be told, he shared, it all became a blur once he realized what he had done.

“I was at home (in his Oakland Hills home),” Durant said. “I fell asleep watching football. I woke up, had charged my phone, and I just happened to look on Twitter. And I see (the person’s comment that sparked his response), and I just don’t remember it. I remember what I said and how I said it, but I just forget everything else. I forgot everything else. I was only focused on that convo, and that was unfortunate. I look like an idiot. My peers are going to look at me like an idiot. All the jokes – bring ‘em. I deserve it.”

He’s saying the right things by apologizing for the Twitter snafu, and maybe he’s truly realized how dumb and petty his actions were. But the fact that he thought bashing his former organization, coach and teammates would be a “joke” — and didn’t explain why he tweets in third-person when he’s half asleep — only adds more questions to this situation.