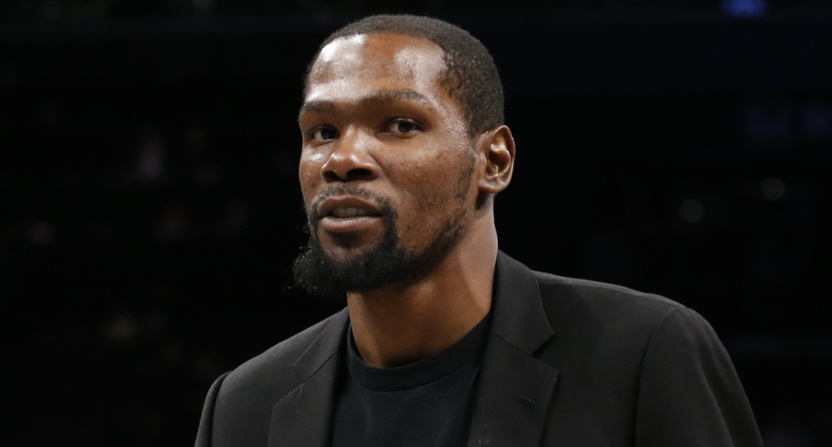 More NBA players have now tested positive for the COVID-19 coronavirus. The Brooklyn Nets announced Tuesday that four of their players had tested positive for the virus, with one of them experiencing symptoms. That adds to the three NBA players who have already tested positive: Rudy Gobert and Donovan Mitchell of the Utah Jazz and Christian Wood of the Detroit Pistons. Shams Charania of The Athletic and Stadium added later that one of the infected players is Durant (seen above after a January 7 game against the Oklahoma City Thunder):

Durant has not had symptoms and was among four positive test results on the Nets. The two-time NBA Finals MVP's message is one for everyone to heed: Stay quarantined. https://t.co/7E58fcyFjm

ESPN’s Adrian Wojnarowski reported that these tests were from a private company the Nets contracted to test their players following their return from San Francisco.

Sources: Brooklyn tested the team upon returning from San Francisco and results came back today. Nets paid out of pocket to a private company to conduct tests. One player awoke with some aches today; rest have experienced no symptoms.

The Nets were in San Francisco last week, set to play the Warriors last Thursday (in an empty arena) before Rudy Gobert of the Utah Jazz tested positive for the COVID-19 virus last Wednesday, leading to the NBA suspending its season. ESPN’s Brian Windhorst reported last week that players from teams that faced Gobert, Donovan Mitchell, and the Jazz within the 10 days before his diagnosis were told to self-quarantine, and that may wind up applying to players who faced the Nets.

In the 10 days leading up to last Wednesday, the Nets faced the Boston Celtics, the Memphis Grizzlies, the San Antonio Spurs, the Chicago Bulls and the Los Angeles Lakers. The Celtics also faced the Jazz in that span, so they were already under some quarantine instructions, as were the Toronto Raptors, Cleveland Cavaliers, New York Knicks, and Detroit Pistons. And Pistons’ forward Christian Wood tested positive for COVID-19 Saturday, so that brings concerns to their recent opponents: the Thunder, the Jazz, the Knicks, and the Philadelphia 76ers. But even teams who haven’t gone up against anyone confirmed as infected so far are worried, and that makes sense given the way this has spread in many cities. It certainly seems that Durant and the other Nets may not be the last NBA players to test positive for this disease.