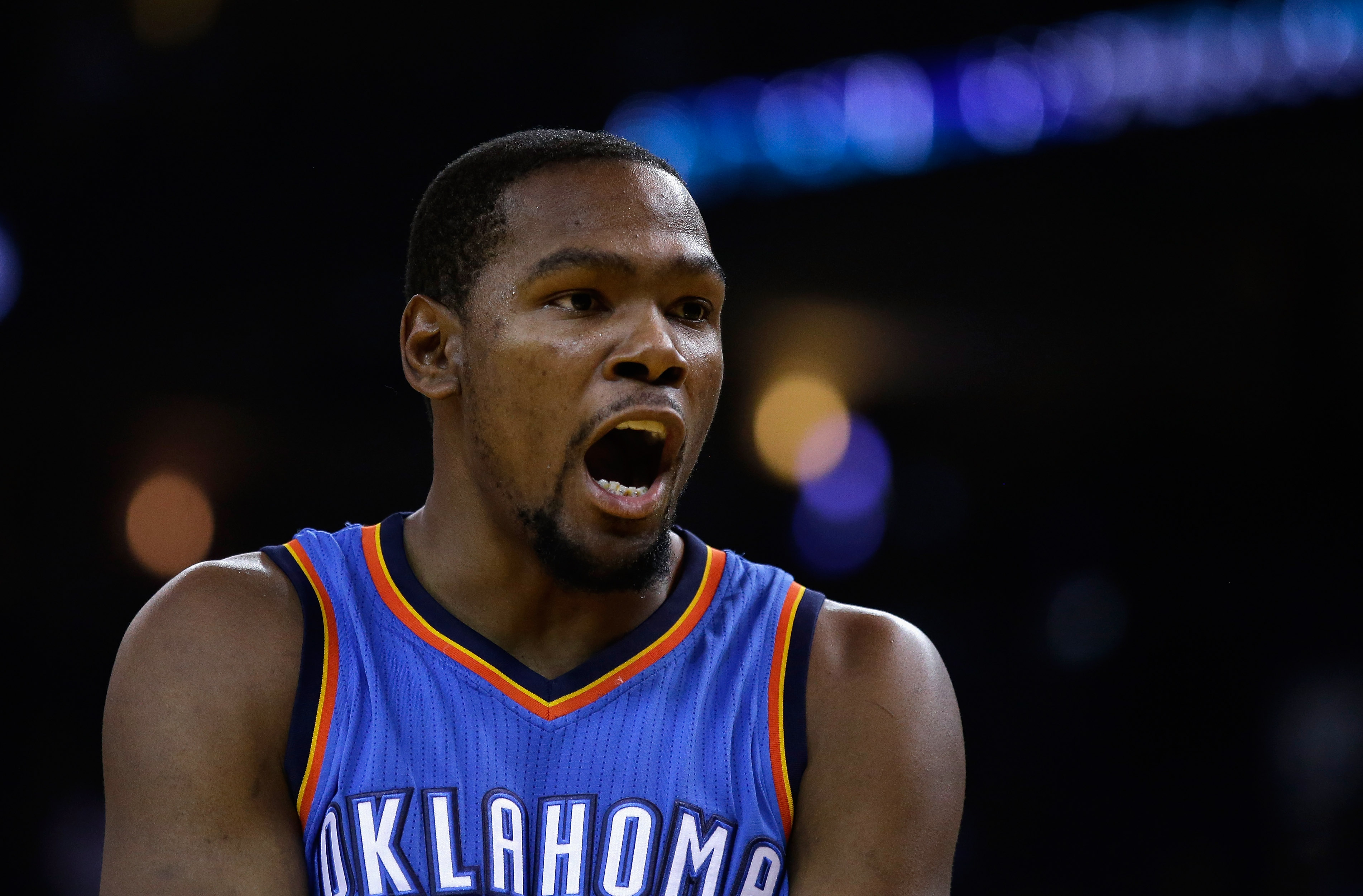 The Oklahoma City Thunder’s Game 7 loss to the Golden State Warriors effectively ended their season, and immediately led to questions of Kevin Durant’s future with the franchise. His contract is up, and he will be an unrestricted free agent this summer.

When asked about his upcoming free agency after their loss to the Warriors, Durant expectedly replied with the following, via ESPN:

Durant will be the most coveted free agent this summer. He’s one of the best scorers in the league, and is one of a very select few players who can be put on any NBA roster, and instantly make them at worst a 50+ win team. That’s what gives him his superstar status.

Typically, when discussing the prospect of Durant leaving Oklahoma City, it was over the fact that they weren’t able to get back to the NBA Finals, or show that they might have been one or two steps away. It would be tough to argue that they didn’t show that this postseason after knocking off the Spurs and taking the Warriors to seven games in the Western Conference Finals. The Thunder have a good coach in Billy Donovan, and a good roster with plenty of young pieces, a couple of things Durant would largely be looking for in another destination. Durant might be hard pressed to find a better situation than the one he’s in now. At the very least, and what might be the most likely option, he could continue to sign two-year deals, with a player option on the second year as LeBron James has planned to do.

So what if Durant does decide to leave? There’s been a rumor floating around out there (isn’t there always) that Durant could possibly join the Golden State Warriors in the offseason, given the Warriors make the necessary moves to free up cap space. While that sounds like fun, Durant doesn’t seem the type of person who would make such a move, and I don’t totally believe that the Warriors would be willing to break up a 73-win machine and possible back-to-back championship team for that. At the same time, it is Kevin Durant.

Another popular destination that has been brought up for Durant has been the Los Angeles Lakers. The Lakers have tons of cap space this offseason, and already have some good young pieces in place, that will likely need a couple of more years to develop. While it’s not the most attractive destination at the moment for that reason, there’s nothing a little roster management from Mitch Kupchak couldn’t fix.

If Durant wants an easier go at things? Head east. The Boston Celtics have arguably the best young coach in the NBA in Brad Stevens. He led his Celtics team of misfits to a 48-win season, and with Durant on the roster and in that conference, it’s hard to imagine them winning less than 55 games. The only downside would be that Isaiah Thomas isn’t exactly a point that’s going to distribute the ball, and if folks were still upset with his touches with Westbrook at point (who averaged 10.4 assists per game!), that might not be the best fit. But, Thomas also hasn’t played with a player of Durant’s skill. Surely Stevens could make that work.

A couple of other destinations for Durant in the East could be with the Miami Heat, or the Washington Wizards. We all know if there’s anybody that can get a superstar to come to his team, it’s Pat Riley. The Heat would have to do some salary cap magic, but if they could pull it off, things would be very interesting in South Florida again. The team has expressed their wishes to re-sign Hassan Whiteside, especially amid the uncertainty surrounding Chris Bosh’s future right now with his health concerns. For me, this one seems like a longer shot than the first two, because surely Durant doesn’t want to hear LeBron comparisons if he bolts for Miami.

As far as the Wizards go, they recently hired Durant’s old coach in Scott Brooks, and have one of the fastest, and best passing guards in the league in John Wall. They’re expected to offer Bradley Beal a new deal, and between the three of them, that would make up a young trio that could do serious damage in the Eastern Conference. And surely you’ve heard, Durant is from the area.

With plenty of directions to go, my best guess is that Durant ends up staying where he’s at, and at least giving himself one more season in Oklahoma City in an attempt to dethrone the Warriors. Another year, and Russell Westbrook could join him in free agency – that’s when things might get really fun.