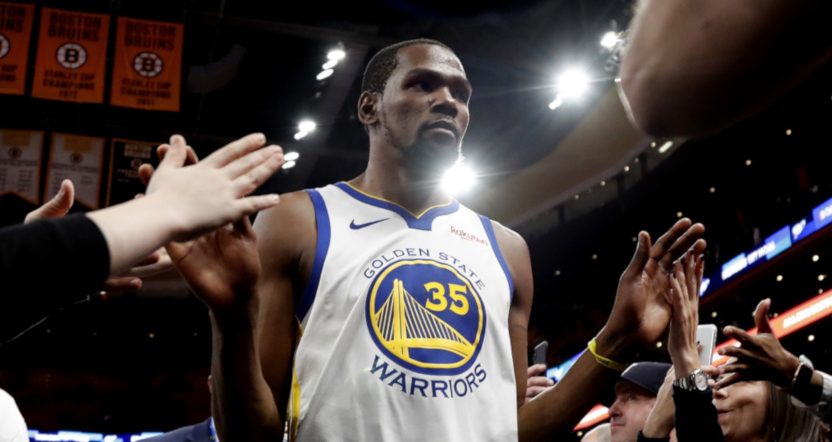 In a world where everyone loves to tell athletes what to do, Kevin Durant has earned the right to control his own narrative.

Durant is enjoying his greatest postseason. He’s the top scorer in the playoffs (34.2 points per game). His player efficiency rating is second in the league (33.1) and his effective field percentage is an astounding .610. Since he told everyone “I’m Kevin Durant. You know who I am,” Durant has totaled an absurd 230 points over the past six games. All this while chasing his third straight NBA championship.

Why would anyone want to walk away from this primo gig? Well, Durant isn’t just anyone. He’s overly sensitive, sometimes surly. He balked at what would have been a great nickname (The Slim Reaper) and instead lobbied for a terrible one (The Servant), which thankfully never caught on. He’s a different kind of a dude.

It’s crazy that Durant would ever want to leave Golden State, a juggernaut unlike any the NBA has ever seen. Rumors persist that Durant will sign with the New York Knicks as a free agent this summer. Confusing, right? However, if you look at it through the perspective of what LeBron did, it might seem less nuts.

When LeBron James left the Miami Heat to return to the Cleveland Cavaliers in the summer of 2014, it wasn’t a complete shock. We heard the whispers. We knew it was a possibility even though we wondered why would he bolt from a team that went to four straight NBA Finals, winning two championships? But the then 30-year-old James felt confident enough in his skills and his ability to draw other superstars.

Legacy secured. James did something special that Michael Jordan never did. That goes to show that even LeBron needed validation. This, of course, brings us to Durant. Like LeBron, Durant had to leave his original team to learn how to win. Earlier in their careers, LeBron James and Kevin Durant both won regular-season MVPs and performed brilliantly with nothing to show for it but heartbreak and frustration.

They had enough, joined a championship organization and won multiple NBA Finals MVPs. Then, LeBron left Miami for the next challenge, seeing if he could replicate that championship formula somewhere else. Now it seems like Durant might do the same thing. Whether or not the Warriors win a third straight title seems irrelevant. This is reminiscent of the speculation that LeBron would return to Cleveland. It started during his fourth and final year with the Heat.

There is one key difference. LeBron’s decision wasn’t second guessed because the Cavs had a young star in Kyrie Irving. And LeBron had already proven he could turn average players into a great team. Just look at the roster of the 2006-07 Cavaliers that LeBron dragged to the Finals.

With the Knicks, there would be a lot more unknowns. New York has been largely irrelevant for two decades and the Knicks don’t have any all-stars. Owner James Dolan has been incompetent, making more news for things off the court. Why would Durant want to deal with that mess?

The NBA has changed. The power brokers are no longer the general managers, coaches or ownership. It’s all about the players. LeBron, Dwyane Wade, and Chris Bosh conspired to form their super team in Miami. That ushered in a new kind of blueprint for success: players coordinating their free agency so they can get together. The same could be at play with Durant, who might bring along fellow free agent Kyrie Irving to the Knicks. And if New York wins the draft lottery, that’s a bonus for Durant.

The dream scenario: Durant, Irving and Zion Williamson. On paper, that’s a team that would immediately shift the balance of power in the Eastern Conference.

All that, however, is speculation. Even if everything lines up perfectly, it’s still a gamble. Why would Durant leave an almost certain thing for a “what if?”

As mentioned earlier, Durant’s a sensitive sort. And for the past three years, all he’s heard is that he joined the comfort of the Warriors’ bandwagon. Athletes often say criticism doesn’t bother them, but it clearly annoys Durant. Why else would Durant have a burner Twitter account? By leaving the Warriors and going to New York, he’ll take on a challenge that would quiet critics.

Durant will turn 31 this fall and is at the peak of his powers. He’ll have about a three-year window to snag another title before his body wears down. Undoubtedly, he could age gracefully by sticking with Golden State. It’s what most of us would choose.

But we’re not Kevin Durant.