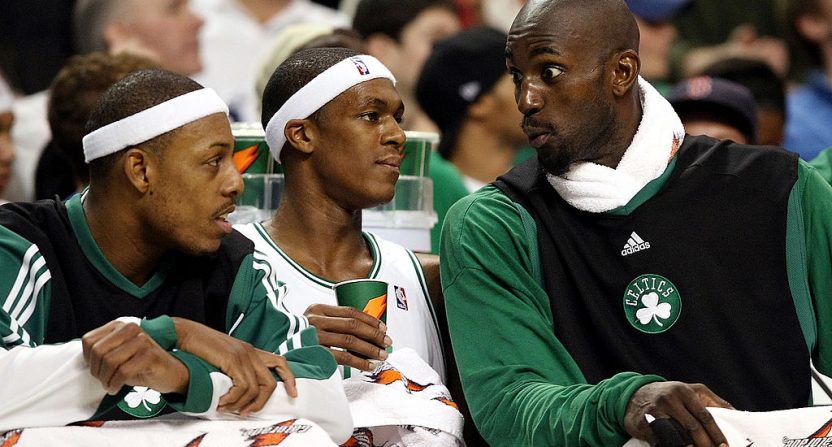 What’s the statute of limitation on leaving a close-knit team to go play for a rival without discussing with your ex-teammates first?

On Monday night, Kevin Garnett, Paul Pierce, Rajon Rondo, Kendrick Perkins and Big Baby Davis got together on KG’s Area 21 show on TNT and discussed Ray Allen. Allen was a key member of the group’s 2008 NBA title with the Celtics before leaving for the Heat in free agency, but he has not been invited to the reunion tour.

Why? Watch the group try to explain:

“It was more than basketball for us… It felt like a sour breakup.”

Here’s what KG had to say:

When Ray decided to go to the Heat I feel like he moved on. He decided to pursue another ring, and he got another ring—shoutout to him—and that’s it.

And here was Pierce’s input:

I was initially hurt by the way everything went down. I don’t have no beef with none of my teammates or nothing, I just was hurt by how it went down. We all came together, we talked about it. We talked every day, we hung out all the time. … I thought we formed a brotherhood here in Boston. And just how we we carried ourselves not only on the court but also off the court. If it was me leaving or KG leaving, I would’ve been like [makes cell phone gesture with hands] Rondo, Perk, Baby. This is what I’ve been thinking about. That’s what I was hurt by: when Ray didn’t just give us a heads up. And then to go to the team—I think I would’ve taken it better if he had just talked to us about it. … I just think if we all had talked about it would have been better.

Perkins and Davis then reiterated the exact same point a few more times to make sure everyone understood that Allen had hurt them all by not reaching out to explain himself.

Perkins, however, opened the door for reconciliation:

“You never know, man. I feel like time heals all wounds, and at the end of the day, sometimes all it takes is for you to see your brother on the pass-by.”

At this point several other former Celtics interjected that someone should reach out. No one mentioned that this reunion would have been a good time to do so. Then Perkins spoke up again:

Oh and Rondo? He didn’t say a word the whole time, even when KG directly asked his thoughts.

Look guys, if you don’t want to invite Ray to your party, that’s cool. But it seems a bit odd to go on national TV talking about how much you resent him, while asserting that the onus is on him to make amends.

Ray Allen left the Celtics for a better job five years ago, after the team tried trading him multiple times. From the outside, it was hard to fault him even then. From the inside, surely emotions were high, and it’s fair that the players were upset. But maybe—maybe!—it’s time to let it go.