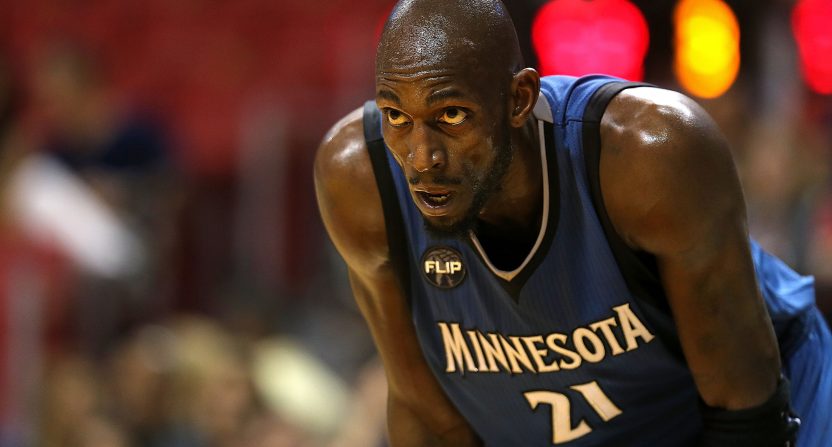 When Kevin Garnett returned to the Minnesota Timberwolves in February 2015, he was thrilled to reunite with his friend and mentor Flip Saunders, who had been his coach years older and was then the team’s president.

But Saunders died in October at age 60, Garnett was left with a coach and front office he didn’t have much relationship with. He eventually negotiated a buy-out with owner Glen Taylor.

Now Garnett is retired, and he’s still a bit bitter about how things went down in Minnesota. In an interview with the AP, he said that “me and Glen don’t see eye-to-eye on a lot of things” and that he was disappointed that he wasn’t consulted more often on personnel decisions.

Most notably, KG took issue with how the Timberwolves handled their tribute to Saunders. When the team decided to produce a memorial video, Garnett chose not to participate. Via the AP:

One glaring absence was Garnett, who said he “couldn’t put a lifetime of friendship into three minutes.”

“How do you put a time limit on something like that?” Garnett said. “And then, too, I thought he wasn’t celebrated the proper way. You have high school banners, you have (expletive) hockey banners (hanging in the rafters). You couldn’t put a Flip banner in Target Center, some place that we helped build? … We established that market. I helped grow that with him. You can’t put him in the (rafters)?

“So I just had problems with how they were shoving this down all of our throats. The young guys, they weren’t invested enough to really understand what was going on. I chose to be mute, to be professional and keep all the negative energy down. There was a bigger message I wanted to tell, but I supported it and just kept my mouth shut.”

It’s hard to know whether these criticisms are fair or whether Garnett’s love for his friend just has his emotions running high.

KG made clear in this interview is that he still has love for his ex-Timberwolves teammates, but he seems reluctant to forgive the front office.

“I wish the Timberwolves all the best. I talk to KAT and some of the young guys all the time,” Garnett said. “I hope they can find a special place in commemorating Flip and celebrating him properly.”

At some point, you have to imagine this will get patched up and Garnett will return to Minnesota for all kinds of ceremonies. But if they decide to put up a banner honoring him, that might be an awkward conversation.