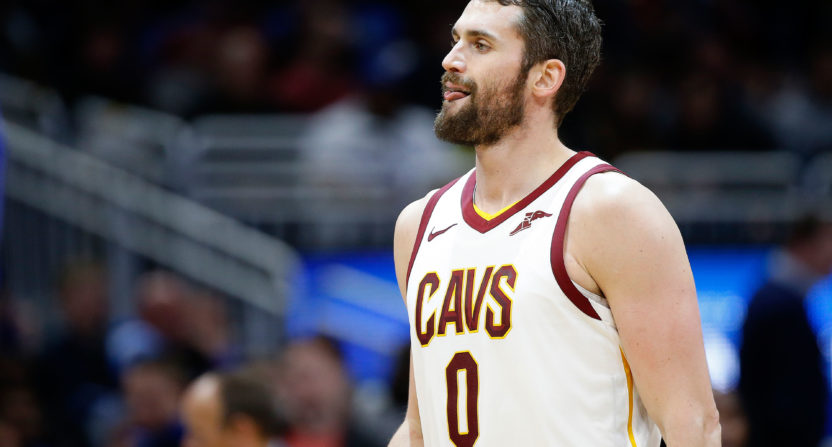 Kevin Love has had his most challenging NBA season to date. While this hasn’t resulted in a drop in performance and still resulted in an all-star season, Love has been recovering from a broken finger.

In addition, Love suffered a panic attack during a Cavs/Hawks game this past November. Love revealed this for the first time for The Players’ Tribune and wants to use this as an opportunity to end the stigma of mental health.

Personally, I have never head a panic attack but I don’t need to have one to know that it sounds dreadful. And like many people who have had them, Love didn’t know what was going on at first. Stress about on and off-court things seemed to exacerbate things but Love felt the usual symptoms one would have when suffering a panic attack. Things become a blur, your heart is beating like crazy and you’re trying to do all you can to get your breath back.

What made this even worse was the stress of trying to hide this weighed on Love even more as there is still the stigma of someone with mental health issues as somehow being “weak.” This panic attack caused Love to change his outlook and be more open about himself.

I’ve never been comfortable sharing much about myself. I turned 29 in September and for pretty much 29 years of my life I have been protective about anything and everything in my inner life. I was comfortable talking about basketball — but that came natural. It was much harder to share personal stuff, and looking back now I know I could have really benefited from having someone to talk to over the years. But I didn’t share — not to my family, not to my best friends, not in public. Today, I’ve realized I need to change that. I want to share some of my thoughts about my panic attack and what’s happened since. If you’re suffering silently like I was, then you know how it can feel like nobody really gets it. Partly, I want to do it for me, but mostly, I want to do it because people don’t talk about mental health enough. And men and boys are probably the farthest behind.

I know it from experience. Growing up, you figure out really quickly how a boy is supposed to act. You learn what it takes to “be a man.” It’s like a playbook: Be strong. Don’t talk about your feelings. Get through it on your own. So for 29 years of my life, I followed that playbook. And look, I’m probably not telling you anything new here. These values about men and toughness are so ordinary that they’re everywhere … and invisible at the same time, surrounding us like air or water. They’re a lot like depression or anxiety in that way.

After Love’s panic attack, the Cavs did their part by setting Kevin up with a therapist and got him to process the things he had been struggling to deal with in life. One such instance was not properly grieving when Love’s grandmother died. Love took a realistic approach when it comes to therapy. Talking to a therapist isn’t magically going to make everything feel better but finding out why something is the way it is may be better to manage things. For Love, that was not using basketball and the things he does every day as an excuse to put off actually dealing with his grandmother’s death.

The entire piece is a must-read. Love revealed that he was inspired by Raptors’ DeMar DeRozan’s openness to talk about his mental health last week. Both have mentioned that if you were to just look at them, you wouldn’t think they had a mental health issue but they did and so does a lot of people. Even the most mentally sound individual, who may feel is the person least needing therapy, could use a person to talk to.