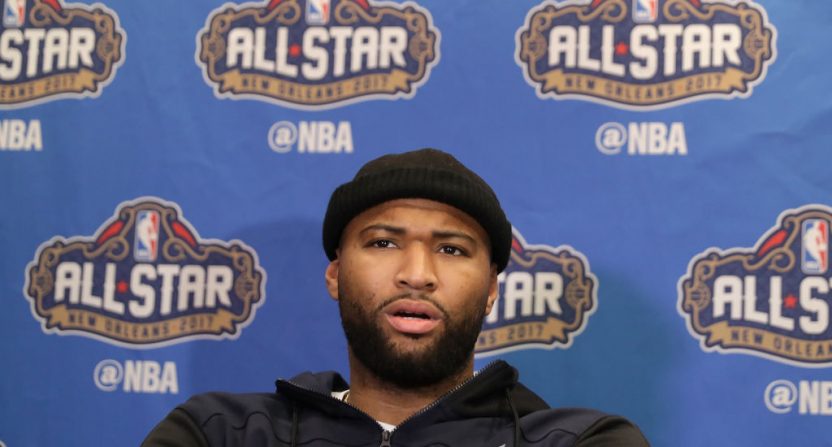 After spending his first six-and-a-half seasons wasting his talents with the Sacramento Kings (outlasting multiple coaches and general managers), Cousins has reportedly been dealt to the New Orleans Pelicans.

For the Pelicans, acquiring a player with Cousins’ talent without giving up Anthony Davis (never going to happen) or Jrue Holiday is frankly remarkable. New Orleans general manager Dell Demps seemed like a surefire candidate to reach the unemployment line at the end of the season, but trading so little to acquire so much will likely will save his job.

Cousins is a machine on the court. He’s averaged 27.8 points, 10.6 rebounds and 1.3 blocks per game in 55 appearances this season. He can beast in the post, shoot the mid-range, and even hit from long-distance. The talent is there. The only thing that’s hampered Cousins throughout his career are attitude issues. He’s prone to technical fouls and throwing occasional tantrums. But wouldn’t you if you played for such an incompetent, ever-changing organization?

The fit in New Orleans remains TBD, but Davis and Cousins will certainly score a lot of buckets, at least.

And while Cousins is a free agent in the summer of 2018, the acquisition is not viewed as a rental for New Orleans.

The Pelicans feel confident they can re-sign Cousins, who is from nearby Mobile, Ala. as a free agent this summer, per source.

So Demps and the Pelicans are giving it a go this season — the Pelicans are a 2.5 games back of the Nuggets for the eighth seed — and the next. It’s a no-brainer trade for New Orleans. Adding Omir Casspi gives them a rotational player whom the Kings wasted.

Buddy Hield is a one-dimensional three-point shooter, three years younger than Cousins. If he turns into a starter eventually, the Kings still lose. I don’t believe he will.

Galloway is a fine backup who should provide secondary scoring. He’s got one year left on his contract, worth just over $5 million.

As for the first-round pick? It’s likely going to be outside the top-10 and potentially out of the lottery altogether — even if it was, it’s top-three protected. It’s a deep draft, but yeesh.

The last piece, Tyreke Evans, might have had his glory days with the Kings, but he’s a broken player on an expiring contract. The only long-term pieces here are Hield and the first. That’s an embarrassing return.

Cousins was essentially assured he wouldn’t be traded and was optimistic — despite all the chaos and calamity — about signing an extension with Sacramento. Kings owner Vivek Ranadive and general manager Vlade Divac had a superstar on their roster, but failed to build around him and dealt him for ten cents on the dollar. I get moving on from Cousins, but not at a value this low. I thought AT LEAST the Kings would get multiple firsts, a promising youngster — Hield is “meh” — and rotation pieces.

Let’s be honest — Divac has shown to be a bad general manager. There’s no other way of putting it. He gave up a better return to rid himself of Stauskas — a comparable player to Hield — than he got for his best player. It’s hard to comprehend.

The Kings, once again, hurt their credibility as a free agent destination.

It’s insane. The Kings should teach a masterclass on how to ruin an NBA franchise. The only sense of reasoning is the Kings are now likely to hold onto the first-round pick they would’ve owed the Bulls if they finished below a top-10 pick.

The Kings were at significant risk to lose a 2017 Top-10 protected pick to Chicago, and trade increases chances to hold onto it.

Sacramento is opting to rebuild in what’s sure to be a new era of rebuilds for the team.

As for Cousins, he just got a first-class ticket to an organization with competence. It should be a refreshing, new experience for him.