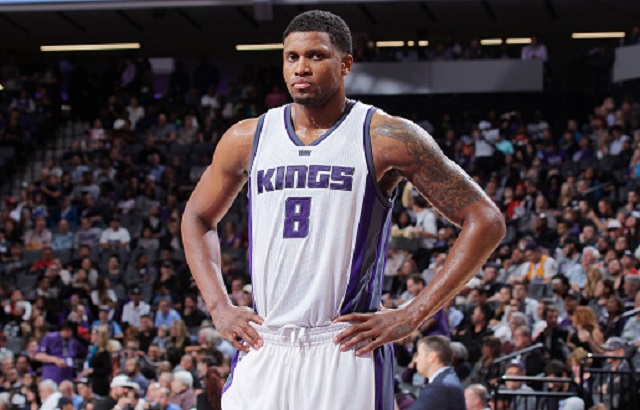 Despite a prominent September report that Rudy Gay would likely not be playing professional basketball for the Sacramento Kings beyond the current 2016-17 season, the 11th-year forward is trying his best to ignore the outside noise and lead Sacramento to its first playoff appearance in 11 years.

“I’m not the first person to have a contract situation, so it’s just going out there and playing basketball,” Gay told The Comeback after Sacramento’s 122-105 win in Brooklyn on Sunday. “I’ve been doing it since I was eight. So that’s not hard to do.”

Gay signed a three-year, $40 million contract extension in November 2014 — a steal in today’s NBA landscape — with a third-year opt-out he’ll exercise to become an unrestricted free agent in July. Despite rumors of his upcoming summer departure or a midseason trade — Oklahoma City is still interested in a trade, per Zach Lowe’s Nov. 17 ESPN column — Gay’s coach and teammates say he’s handling himself totally professionally and trying to help the 7-11 Kings.

“You gotta be a pro,” first-year Sacramento head coach Dave Joerger told The Comeback, “and you put that stuff away and do your job and work with your teammates. Everybody loves him, and I think he likes his teammates a lot, and we’re having fun.”

Gay’s third full season with the Kings could turn out to be his best one. He’s shooting a career-high 40 percent from three and averaging nearly 20 points per game on just a shade under 15 shot attempts. As this shot chart shows, defenses can’t give Gay any room to operate on the left side of the floor, shooting 9-of-14 from the left wing and 4-of-6 from the left corner. 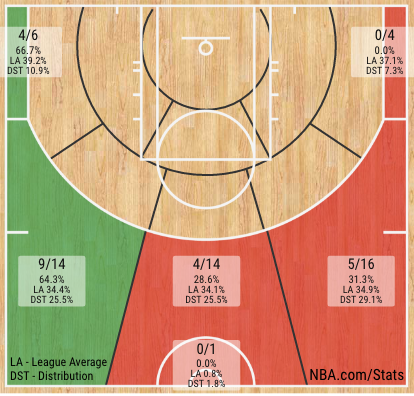 “Rudy’s been great,” Kings guard Arron Afflalo told The Comeback. “He’s played at a high level, for the most part, early in this season. His attitude’s been great.”

Gay’s Basketball-Reference PER of 19.5 is just shy of his career high, and his ESPN Real Plus Minus ranks eighth among 80 eligible small forwards (27th overall in the league). But more importantly, the Kings have needed Gay on the floor more than any other player.

Sacramento has outscored its opponents by 2.7 points per 100 possessions when Gay is on the floor, but is outscored by a massive 11.9 points per 100 when Gay’s on the bench, per NBA.com. That on/off split is even larger than DeMarcus Cousins’.

Every player handles a contract year differently. Some players eschew team-oriented goals and try to put up individual numbers, while others plays like a team’s success will lead to a more lucrative deal down the road. Afflalo said it became apparent to him towards the end of his one-year tenure with the New York Knicks — his opting out was always assumed when he signed a two-year deal the previous summer — that the team didn’t plan on bringing him back. Did that change how he approached his play in what turned out to be a contract year?

“Not really,” he said. “I’m just really trying to find happiness and a place where I can play at a high level and win.”

Playing and winning at a high level is something that hasn’t been done in Sacramento in over a decade, but the Kings are still in playoff contention as we approach the quarter pole of the regular season. Put into context, 7-11 isn’t so bad given that the last time Sactown had a record better than .500 through 18 games was in the 2004-05 campaign.

Guard Ben McLemore is Gay’s only other teammate besides Cousins who’s been with the team throughout Gay’s three seasons in Sacramento, and views the 11th-year veteran as a big brother. According to McLemore, Gay is treating his contract year like any other year as a King.

“He’s been focused now help this team win more games and help this team develop and improve each and every day,” McLemore told The Comeback. “I think he’s done a great job of that.”

There are some players on the final year of their contracts that check out and just coast through their seasons, only worrying about their own stats. You know who they are.

“No, not him,” Afflalo said of Gay. “The energy and effort he’s put in, in game and in practice, working out, having great camaraderie with his teammates.”

Cousins, as always, is also mentioned in countless trade rumors, with speculation rampant that this is maybe, actually, possibly the season that Sacramento finally deals him to a contender. But as long as the Kings are somewhat in contention for a playoff spot, it’ll be difficult for management to contemplate trading Cousins or Gay. However, if things turn for the worse — as it reliably has for many years now — it’ll be hard to justify not dealing Gay after reportedly making it very known that he had little interest in returning.

But until that point, Gay’s putting up great numbers, is a model citizen and is keeping his team on the periphery of the playoff race at this early juncture. What will happen to Gay, Cousins and others if the Kings go on a midseason tailspin is anyone’s guess.