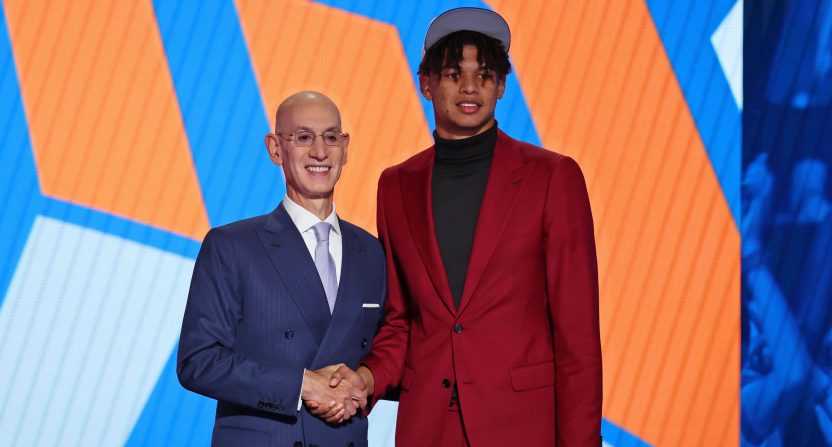 Few teams in the league were as busy as the New York Knicks during the 2022 NBA Draft. But New York’s activity created more questions than it answered.

The Knicks selected Ousmane Dieng with the 11th pick of the draft but quickly dealt his draft rights to the Oklahoma City Thunder. That created a series of moves that took a long time to sort out.

Tim Bontemps of ESPN summed things up as best as he could.

Stephen A. Smith, who had previously joined fellow Knicks fan Spike Lee in an on-air prayer right before the selection of Dieng and all of the ensuing madness, was not happy. And in typical Stephen A. fashion, he made his displeasure known.

Stephen A. Smith has thoughts on the New York Knicks' draft. 🏀😂😂😂 pic.twitter.com/OTEiBKYOP7

Others in the NBA world joined him in ripping apart the Knicks.

Kemba Walker is on a $9M expiring contract and look at the salary dump cost.

For comparison's sake, the Jazz traded Derrick Favors' $20M/2-year pact for a future 1st, while getting a 2nd and cash back. https://t.co/ykrdCGo6ql

So basically the NYK spent the night trading picks and Kemba.

Draft Day is not a business model. https://t.co/oYel37XPOi

The Knicks are their own grandpa https://t.co/2tLMAdvchn

I cannot criticize the Knicks' draft moves because I don't understand what they were yet. They have foiled me with math. But I'll be back. Oh yes, I'll be back. https://t.co/C6cSQiueWr

The Knicks did finally land a player, drafting Trevor Keels from Duke No. 42 overall. Keels’ decision to enter the draft drew a mixed reaction and getting selected in the mid-second round won’t do anything to quiet the critics.

This is why Trevor Keels should have returned to Duke: He's not ready, and falling to No. 42 proves that.

In reality, the nature of drafts is that it takes a few years for accurate grades to be made. Occasionally, players will be clear hits or busts immediately. But far more often than not, it takes time and patience. That is especially true when future picks are involved. New York’s front office hasn’t done much to earn the benefit of the doubt since James Dolan took over, but most of the worst moves were made with different general managers. So, if you’re looking for the positive, it’s right there.

When all the dust settles, Draft Day 2022 may not be remembered negatively among Knicks fans. But it will be one of the most confusing days in the franchise’s history — and think of the ground that covers.