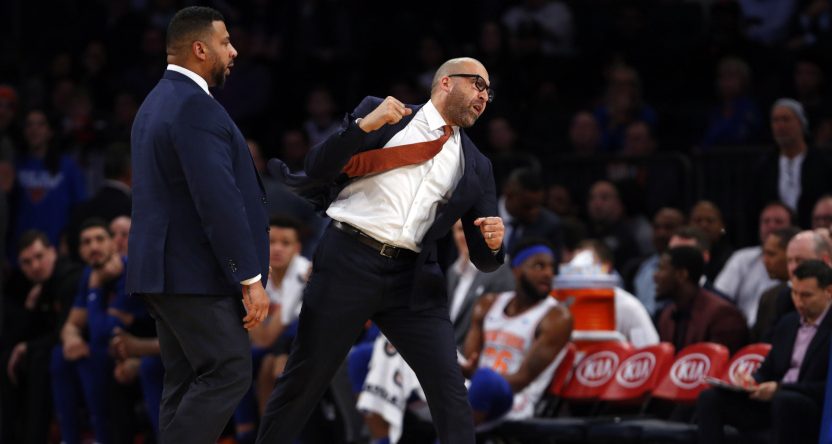 Things are not going so well for the New York Knicks at the moment. After a 114-110 loss to the Houston Rockets Wednesday night, they’re 10-36 on the year, which is the second-worst record in the NBA (ahead of only the 9-40 Cleveland Cavaliers). And there’s a whole lot of drama around the team, from Allonzo Trier apologizing for a profane direct message to a critical fan to Tim Hardaway Jr. complaining about Trier throwing him under the bus in that DM to Enes Kanter being upset about not playing (to say nothing of his war with Hedo Turkoglu and the Turkish government) to the team reportedly putting Hardaway and Courtney Lee on the trade block. But that (well, the Kanter situation in particular, but really, all of it) led to an incredible quote from coach David Fizdale (shown above after his ejection Wednesday) Thursday:

Asked if he’s worried Enes Kanter will become a distraction, David Fizdale cracked, “What are we going to do, lose more games?”

But beyond that, it’s worth talking about how absurd this all is. For one thing, the Trier situation involved a fan criticizing him on Twitter for not defending a critical late-three pointer from the Rockets’ Eric Gordon Wednesday, and Trier responding “It was supposed to be a switch dumb ass you think i just let n—a walk up and shoot a 3 smh y’all ‘fans’ don’t think.”  That made Hardaway mad, as he was the player who Trier said was supposed to switch: in comments to media after practice Thursday, he shot back.

“Oh, so he was blaming other people, basically?” Hardaway said with a snicker before pausing and choosing his words carefully. “At the end of the day, I think it all falls down on the team. Team defense, you learn from it. We watched film, we looked at today. I think in that scenario I was denying James, trying to deny him from the ball and have someone else score. But, yeah, just got to watch it and look it over and see what we can do better to make sure that doesn’t happen again. That’s all I can say.”

And as for Kanter, his own teammates heckled him Wednesday during his first did-not-play in 114 games with the team:

As the Knicks were playing the Rockets close in the fourth quarter at Madison Square Garden Wednesday night, Enes Kanter sat on the bench alone, away from an ongoing huddle during a timeout. The center had not played a minute up to that point, relegated to a reserve role as coach David Fizdale started one player after another over him in the last few games.

While the Knicks assembled, Kanter never left his seat. He listened as assistant trainer Anthony Goenaga talked to him, gesticulating, then moved over as Mario Hezonja sat down next to him. Hezonja had not played yet, and would not play, either. He put an arm around Kanter and delivered a message.

That didn’t go over well with Kanter, who issued a “If you’re going to play me here, play me. Or if not, then just get me out of here” line after the game, and then said Thursday he was annoyed after being told earlier in the day he’d start and then not playing at all. He then said his treatment was unfair given his age:

So, all seems far from well with this team. But as Fizdale noted, it’s not like they can really do much worse.