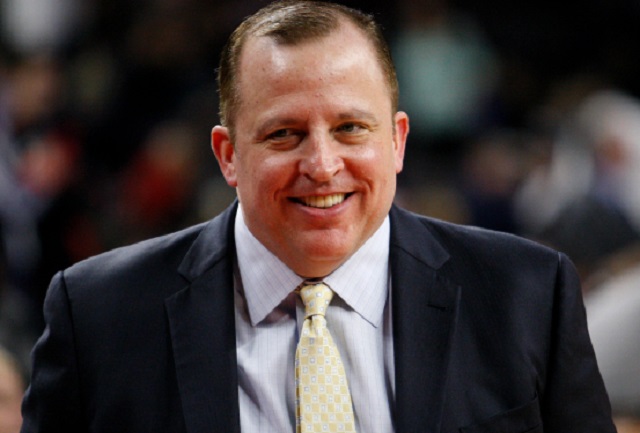 The New York Knicks have been a moribund disaster of an NBA franchise for the better part of the last two decades. They haven’t been to the playoffs since 2013 and they haven’t had a head coach last longer than two seasons since 2014.

They are reportedly pinning their hopes of reviving this once-admired franchise and returning to glory on the lapels of Tom Thibodeau. According to Adrian Wojnarowski, the Knicks and Thibs are currently finalizing the details on a five-year contract that will make him their new head coach.

Knicks president Leon Rose and agent Spencer Breecker of CAA Sports are working to complete contractual terms and a signed agreement is expected in the near future, sources tell ESPN. https://t.co/77EnJuf436

Thibodeau has long been something of a favorite to replace David Fizdale, who was fired following a 4-18 start to the recently rebooted 2019-2020 NBA season. A lot of that expectation was due to the fact that Knicks president Leon Rose was Thibodeau’s agent at CAA. Thibs was also a longtime assistant with the Knicks, working under Jeff Van Gundy from 1996 to 2004. Rumors swirled that Thibodeau’s relationship with Van Gundy and some bitter feelings about being passed over before might mean he wouldn’t get the gig this time around, but if those were issues they’ve clearly been overcome.

After a long run as an NBA assistant coach from 1989 to 2010, Thibodeau finally got his first head-coaching nod with the Chicago Bulls. His first season with the team showed tremendous promise as the Bulls finished 62-20 and made it to the Eastern Conference Finals. He was named NBA Coach of the Year having tied the record for most wins by a rookie head coach. Thibodeau spent four more years in Chicago with diminishing returns along the way, thanks in large part to Derrick Rose’s injuries. The Bulls never missed the playoffs in his five seasons there, but the sagging win totals led to his dismissal in 2015.

Thibodeau was hired by the Minnesota Timberwolves in 2016 as their new head coach and it marked a three-year stint that included some highs (Minnesota’s first playoff berth in 14 years) and lows (the Jimmy Butler saga that led to the star demanding a trade out of town). He was fired midway through his third season.

The upside for Thibodeau is that he comes to New York with a stellar winning percentage (.589) and a reputation for turning franchises around quickly. However, the current Knicks talent pool he’s working is going to need a major overhaul and he does bring with him a reputation for butting heads with star players as well as a demanding work ethic that can rub some the wrong way, especially younger ones.

The initial reaction regarding the latest Knicks hire is somewhat positive, though many folks wonder aloud if the current set of players will mesh with his demanding practice and playing style.

The @nyknicks are serious about player development, scouting and winning.

Tom Thibodeau does all at a high level. If the roster of players really work, they will win with Thibs. @NBA https://t.co/VxIkP9ZDFx

Tom Thibodeau is the definition of CULTURE!!!! Finally the Knicks are trending in the right direction for once.

In hiring Tom Thibodeau, the Knicks have put themselves in perfect position to build a perennial contender … in the mid-2000s

Tom Thibodeau to the Knicks, where he can grind their young players to powder in a desperate chase for 35 wins, as the ancient hilarious prophecy foretold