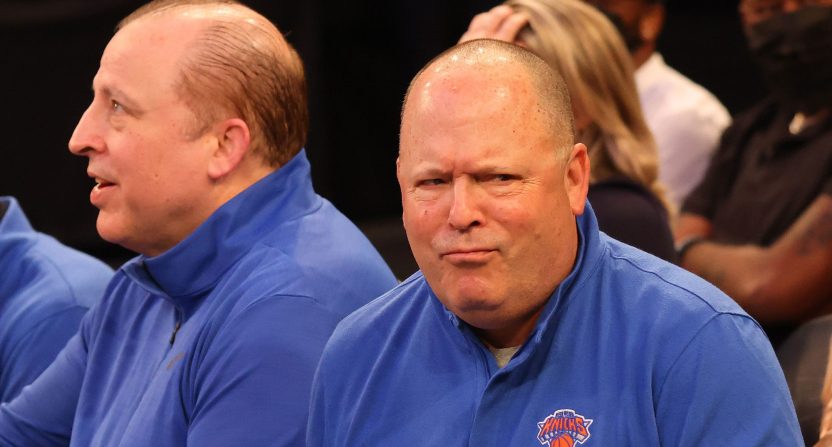 The 2022 NBA Draft featured a number of teams coming out with big hauls that can potentially help build their future for the better.

The New York Knicks on the other hand had an extremely confusing NBA Draft.

They came into the draft with the No. 11 and No. 42 picks before trading the 11th pick to the Oklahoma City Thunder for three future first-round picks.

Then the Knicks traded one of those future first-round picks along with four future second-round picks to the Charlotte Hornets for the 13th pick in the draft.

They then traded that pick to the Detroit Pistons along with Kemba Walker for a future first-round pick.

It was a wild and hectic night for the Knicks and Knicks fans, who were extremely confused and mostly just flat-out upset by their moves on Thursday.

Stephen A. Smith has thoughts on the New York Knicks' draft. 🏀😂😂😂 pic.twitter.com/OTEiBKYOP7

Reactions from fans prompted Knicks president Leon Rose to release a statement on Friday, explaining their decision-making during the draft.

“Last night, we made three tables involving draft picks, which resulted in increased financial flexibility and additional draft capital moving forward. We now have a total of 22 picks, 11 in the first round and 11 in the second round, over the next seven years. We have the ability to be active in free agency, as well as in the trade market. Our focus will remain to be strategic and thoughtful in our team building, doing it the right way, while feeding off of the momentum from the end of the last season and prioritizing our player development program.”

“Thank you to Knicks fans for your continued support.”

Reports suggest that the Knicks made a majority of these moves to potentially go for incoming free agent Jalen Brunson this offseason, who had a breakout year for the Dallas Mavericks in the 2021-22 season.

The Jalen Brunson Sweepstakes just got real. My in-depth story on the major momentum New York is building in its bid to sign Brunson away from Dallas: https://t.co/9ahSR7OBag

Most Knicks fans’ issues with their moves are that they haven’t exactly been a major destination in free agency as of late.

While Munson’s father is on New York’s staff and Rose used to be his agent, the Mavericks reportedly still feel optimistic about their chances to keep Brunson, and if the Knicks do all of this to end up with nobody yet again in free agency, it will be yet another failure of an offseason for New York.