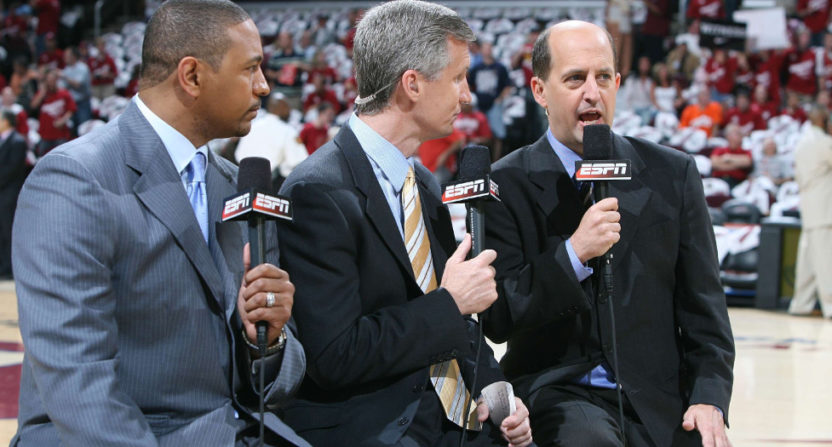 Things got a little weird on the NBA on ABC coverage of Game 1 of the Golden State Warriors-San Antonio Spurs series Saturday. Earlier in the day, Frank Isola of the New York Daily News reported that the New York Knicks had officially reached out to ESPN/ABC analysts Mark Jackson and Jeff Van Gundy about their head coaching job, adding them to a wide list of candidates that includes Villanova’s Jay Wright (unlikely), former Memphis Grizzlies’ coach David Fizdale, and Jerry Stackhouse (currently the head coach of the Toronto Raptors’ G-League affiliate, the Raptors 905).

Well, Jackson and Van Gundy were both on that Spurs-Warriors broadcast Saturday, and with the game well out of hand in the fourth quarter, the broadcast showed Fizdale in the stands. And that led to some awkwardness:

The broadcast team talks about David Fizdale's name getting brought up for some coaching jobs…. Mark Jackson coughs and clears his throat ?

Play-by-play announcer Mike Breen said Fizdale’s “name has been mentioned prominently in a couple of openings,” and then there’s a big ahem, and Breen carries on “along with a couple of other names,” then there’s another ahem. And, as noted in the tweet, those both seem to come from Jackson, as Breen seems to be still talking through the first one and Van Gundy chimes in with a “He did a terrific job at Memphis” during the second cough.

But later, on Twitter, Jackson said the cough was from Breen:

Maybe that actually was Breen, but if so, he sure works that cough into his natural speech pattern. And if it was Breen doing this to try and subtly indicate his broadcast partners have also been mentioned (a possibility, given the way he does that more explicitly later), that’s better and less awkward than if Jackson was doing this to try and promote himself. But the way it sounded on the broadcast certainly led to many thinking it was Jackson.

At any rate, this clip then transitioned into further discussion of Fizdale and of Jackson and Van Gundy as candidates, as Van Gundy then says “He’ll be involved in, I would think, most openings.” Jackson then says “And deservedly so,” Van Gundy says “Absolutely,” and Breen says “Of course, he doesn’t have a nice cushy broadcasting job,” and Van Gundy responds “I don’t know what you’re talking about, Mike.”

So, yeah, that was just generally weird. And it comes off better if it really was Breen coughing, and if so, thanks to Jackson for pointing it out. But Breen might want to be a little more careful about how he does that in future so the world doesn’t think this is Jackson trying to promote himself.