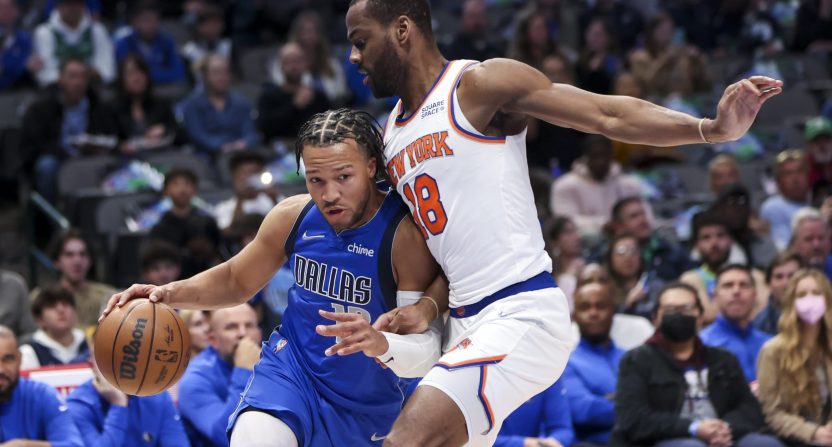 The New York Knicks shocked everyone during the 2022 NBA Draft with a number of trades that had many Knicks fans confused about the direction of the organization.

The organization traded their 11th pick in the draft to obtain a number of future draft picks from the Oklahoma City Thunder, only to trade back up in the draft, and then abruptly trade that pick to the Detroit Pistons along with Kemba Walker to rid themselves of Walker’s contract.

The move indicated that the Knicks are all-in on spending money in free agency this offseason. And they made yet another move on Tuesday to clear as much salary as possible.

The Knicks are trading center Nerlens Noel and guard Alec Burks to the Pistons, sources tell ESPN. The Knicks will unload $19M more in salary, clearing the way for cap space to try and sign free agent guard Jalen Brunson.

This move freed up $19 million in salary for New York. That’s expected to be used for an offer to Dallas Mavericks point guard Jalen Brunson, who will be a restricted free agent this offseason.

The Knicks have reportedly become favorites to land Brunson (seen above driving against Burks in a March game), and are expected to offer Brunson a multi-year contract worth around $110 million.

This has Knicks fans feeling a bit uneasy about their future, with many thinking they may be overpaying Brunson should he decide to sign with New York.

Knicks fans, I love you guys – but you can’t hail Leon Rose as a genius when he trades for second-round picks and tout their value when NY receives them… but turn around and say “who cares about 2nd round picks – they’re worthless!!” when New York trades them away.

The New York Knicks are giving away players to overpay Jalen Brunson.

This franchise is something else.

Brunson had a breakout season last year with the Mavericks, averaging 16.3 points and 4.8 assists per game in his fourth year in the league.

While he could possibly take the next step in his career next year, those stats don’t exactly scream for a max contract offer from a potential suitor. But the Knicks are reportedly planning to do that anyway.

A big selling point for Brunson to join the Knicks is that they plan to make Brunson their long-term starting point guard. That’s something that Brunson hasn’t exactly been doing in Dallas, with Luka Doncic taking much of the ball-handling responsibilities on the Mavericks.

Part of the Knicks pitch to Jalen Brunson, I’m told, is the opportunity to be a full time point guard. In Dallas, Brunson can play with Luka. But Luka is the de facto point guard. In New York, Brunson would run the show.

New York has had issues luring in notable free agents in the past. But from an outside perspective, Brunson doesn’t exactly move the needle and suddenly make them a contender in the Eastern Conference.