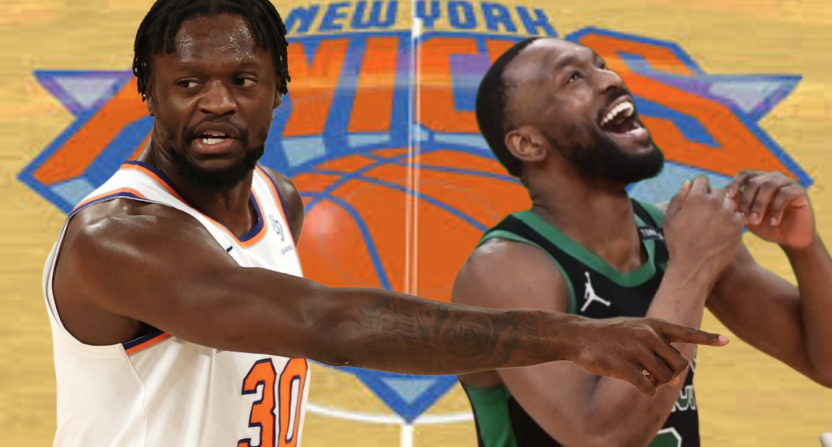 At the very least, the New York Knicks shouldn’t be worse than they were last season. While they should be better, will that be enough to climb higher in the Eastern Conference?

Forward Julius Randle has signed a four-year, $117 million extension, the Knicks announced Thursday. He had one year remaining on his current contract, combining for a total package of five years and $140 million. According to ESPN’s Adrian Wojnarowski, signing a deal now

Randle, who will turn 27 in November, is coming off the best year of his career. He averaged 24.1 points, 10.1 rebounds, and six assists per game, leading the Knicks to a fourth-place conference finish and their first playoff berth since 2013. That earned him NBA Comeback Player of the Year honors and a spot on the All-NBA second team.

Yet the Knicks’ new backcourt is what looks intriguing and will likely be the difference in whether or not the team can challenge the 76ers, Nets, Hawks, and NBA champion Bucks at the top of the conference. No, they didn’t sign Chris Paul and eat up all their salary cap space. They didn’t trade for Kyle Lowry and give up valuable current players or future draft picks.

(It should also be noted that those two, along with Mike Conley, are in their mid-30s, unlikely to be impactful if and when the Knicks are ready to contend for a conference title.)

But free agent Evan Fournier provides a potent three-point shooter (41 percent) who can create more space for slashes to the basket and Randle working down low. Did the Knicks pay too much for Fournier at $78 million over four years? Probably, but they had to pay to get better. And the upgrade in scoring (17.1 points per game) makes up for the defense they’ll lose with Reggie Bullock leaving for Dallas.

The real difference-maker could be at point guard, where Bronx native Kemba Walker is returning to New York after agreeing to a buyout from the Oklahoma City Thunder. At 31 years old and coming off a season marred by a knee injury, it’s worth asking if he’s breaking down after 10 NBA seasons.

But with a longer, closer-to-normal offseason, Walker is expected to get the rehab and recovery time necessary for that knee. (The Celtics’ first-round exit in the 2021 NBA Playoffs also provides him with more time.)

He’ll almost certainly add a scoring punch at point guard, averaging 19.7 points and 4.9 assists per game and shooting 36 percent from three-point range while hobbled by injury. Compare that to Elfrid Payton, who averaged 10.1 points and 3.2 assists while making 29 percent of his threes. As with Fournier, Walker will be a defensive downgrade. But the expectation is that his offense will compensate.

Best of all, Walker will sign a two-year contract worth approximately $8 million per season. That’s a significant discount from the $30 million per year that Paul would’ve cost. And if the Knicks decide that they want to pursue an even more impactful upgrade at point guard — say, Damian Lillard, if he’s ready to move on from Portland — the team should have more financial flexibility to make such a move.

The New York Knicks are planning to offer Kemba Walker a contract worth roughly $8 million in average annual value, according to league sources.

As popular as bringing Walker back to New York will be, forming a more potent scoring lineup with Fournier and RJ Barrett, are the Knicks in a stronger position to move up the Eastern Conference standings? They certainly appear to be more talented, but are they better?

However, if Brooklyn keeps its “big three” of Kevin Durant, Kyrie Irving, and James Harden healthy, the Nets have to be viewed as the favorite. What will the Sixers do with Ben Simmons? And can the Bucks keep the championship gang together? Milwaukee has already lost P.J Tucker to the Heat, who figure to be much improved after adding Lowry.

If the Knicks aren’t better matched up against their conference rivals, some might wonder if there’s much point to the moves they made. But they weren’t going to make a major jump in one offseason. Making the playoffs last season was a surprise and showed the Knicks are further along than projected.

It might take another year or two before New York can be viewed as legitimate contenders. Yet the Knicks are closer than they were a year ago and that progress has to be cause for excitement.