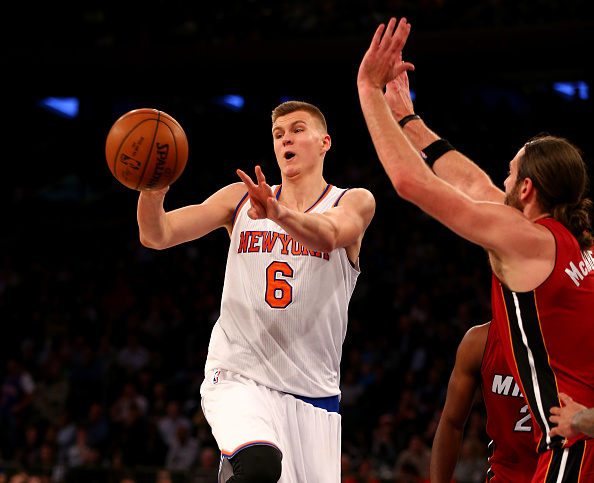 Even Kristaps Porzingis’ biggest proponents didn’t expect this. Take Scott Roth, for example. A former NBA player and assistant coach, Roth spent six months last season working for Sevilla in Spain’s ACB League. Porzingis was one of his team’s top guns — and that right there was reason No. 1 Roth believed.

Porzingis was 7’1, but also just a skinny 19-year-old boy. He was raw, physically and mentally, and bumping bodies with grown men in a league short on free movement and widely viewed as the second best in the world. And yet the numbers were there: 21 minutes, 11 points, five rebounds, 36 percent shooting from deep.

The stroke was pretty. “I coached Dirk [Nowitzki] as a rookie, and Kris is a better shooter than him,” Roth said this week in an e-mail. The post skills were evident. Also, he never showed fear.

That’s the scouting report Roth shared with the myriad NBA scouts and execs that reached out prior to June’s draft. Phil Jackson was one of the few that listened and, after nabbing him with the fourth overall pick, his Knicks are now reaping the rewards.

“I told everybody that if he can stay healthy, in two or three years he’ll be a monster,” Roth said. “No doubt an All Star.”

Now it seems it might not even take that long, and even Roth, who’s keeping tabs on his former player from Shanghai, admits that he’s pleasantly surprised.

“I thought he may get pushed around a bit until he got stronger,” Roth said. “He’s not afraid of anything or anybody, but I did think he would struggle rebounding.”

And he did, at least during Summer League in July, where Porzingis averaged just three rebounds despite playing nearly 21 minutes per game. Then the season kicked off and suddenly the Latvian rookie morphed into a rebounding machine. He learned from his mistakes, figured out how to use his height and octopus-like arms. In one early season game he pulled down 15 boards. He finished with 14 in three others and is averaging nearly nine per night to go along with his 15 points and two blocks.

But there’s more to it, other reasons why Knicks fans sit at their desks and watch Vines of his acrobatic putback dunks and Hakeem-like post moves on loop, why they roar for him when he steps onto the Garden floor and beg for his return the moment he reaches the bench for a quick rest.

“His personality and attitude are just perfect,” says Eitan Nidam, a 27-year-old fan from the Bronx who works out of a home office with Knicks hats and autographs hanging on the walls. “He’s always saying the right thing, seems like he really wants to learn and that he’s happy to be here.” It’s hard for any Knicks fan to disagree, even if they were understandably nervous at the time he was drafted.

Porzingis has no problem flashing his effervescent smile, but knows not to do so too much. He’s got some arrogance to him, but he’s not annoyingly cocky. He’s confident, but also knows when to defer. Oh, he loves WorldStar, too.

Really, there’s nothing not to love, and so Knicks fans like Nidam are back to acting like the fanatics they are.

Wondering if Porzingis would work best as a hybrid-center or stretch-four or something different and entirely new. Grumbling about Derek Fisher’s decisions, screaming at the TV after watching Carmelo Anthony hoist yet another ill-advised mid-range shot, groaning at performances like Wednesday night’s 106-85 blowout loss in Utah, wondering if the team, one that could barely piece together 17 wins last season and now standing at 10-13 after losing its last three games, can actually make the playoffs.

The playoffs. The Knicks. Together. Imagine that.

Only the present is no longer what matters. This, after all, is just the start of the story, not the end. For the first time in what seems like forever the Knicks’ future appears to be in good hands. A pair of very large ones, belonging to a very large, stereotype-breaking man who’s both exhilarating and athletic, and who despite not being old enough to legally drink, has already shown that can hang and even dominate when playing with the best of the best.