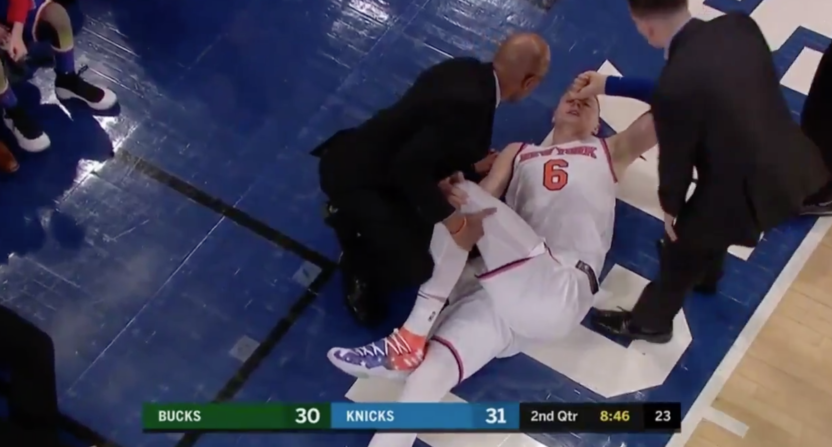 When New York Knicks and Milwaukee Bucks fans showed up at Madison Square Garden on Tuesday night, most of them probably expected to see Kristaps Porzingis and Giannis Antetokounmpo go blow-for-blow.

Instead, Knicks supporters were treated to a gruesome sight as The Unicorn, the possible savior of the franchise, the great KP, landed awkwardly on his left leg and had to be helped off the floor.

Rather then spending the rest of the evening focusing on the game at hand, we can assume most Knicks fans are holding their breath. Less than an hour after KP was helped off the court, word came out he would need to undergo an MRI to determine the severity of the injury.

Kristaps Porzingis was walking on his own and described as "OK" as he went to the hospital for an MRI on his left knee, per league sources.

Walking is definitely a good thing. Then again, Joe Thornton of the San Jose Sharks played an entire playoff series on a torn ACL and MCL, so who knows. Just because Porzingis can walk doesn’t necessarily mean there isn’t ligament damage in his knee.

Without knowing the severity of the injury, people are already lining up to give KP their ACL in order to keep him on the court.

Kristaps Porzingis has tore his ACL. I'm ready to rip out each of my own stupid ACLs to give to him and the Knicks ??

i would sacrifice my acl and give it to Porzingis

somebody tell porzingis he can have my knee/acl/ankle whatever

Time will tell if it’s an ACL injury or just a simple sprain, which would obviously be a best-case scenario at this point for Porzingis and the Knicks.

UPDATE: Porzingis had the MRI and the results are as feared. The Knicks announced that the 22-year-old star has torn his ACL.

Medical Update: An MRI confirmed that Kristaps Porzingis tore the ACL in his left knee.

This is obviously devastating news. Hopefully Porzingis can make a full recovery and maintain the same athleticism and explosiveness that have make him such a unique talent at 7’3″.  And it’s another setback for the Knicks in their rebuilding efforts (and for once it wasn’t their own fault).