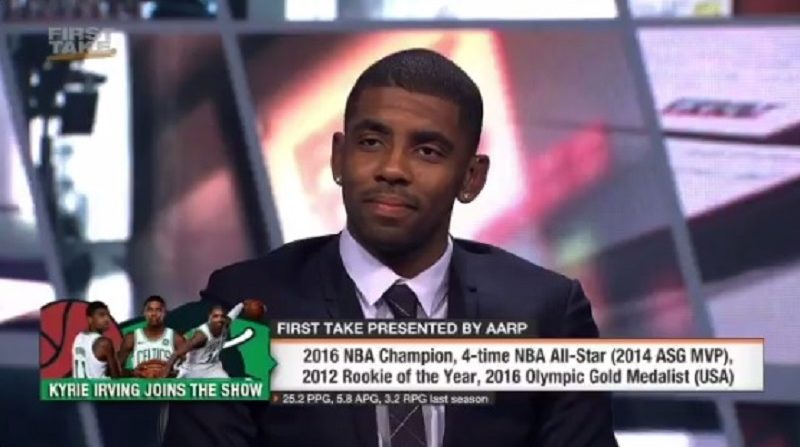 For once, the weirdest things said on ESPN’s First Take didn’t come from Stephen A. Smith or Max Kellerman. Instead, it was new Boston Celtic Kyrie Irving making headlines Monday with an odd appearance that saw him make a bunch of seemingly-nonsensical comments, further his feud with LeBron James, troll Kellerman repeatedly and dodge numerous questions.

The highlight of the whole thing might be this, when Stephen A. Smith asked him about his trade request and media reports of it creating distractions:

oh if ur very much woke there is no such thing as distractions ??? pic.twitter.com/VsQ6pWURTE

Well, Irving certainly has some interesting beliefs, including (apparently) that the earth is flat. (Much to the annoyance of middle-school teachers.) Whether that qualifies as “very much woke” or not is a matter of opinion. But that was just part of the weirdness in this interview. Consider this exchange Irving had with Smith about not speaking to LeBron before asking for a trade:

.@KyrieIrving on why he didn't inform LeBron James that he wanted out of Cleveland. pic.twitter.com/WF9GlCA54o

“Did you speak to LeBron James or talk to LeBron James before you and your representatives met with ownership to let them know you wanted out?” “No.” “Why not?” “Why would I have to?” “If you don’t SPEAK to somebody about it, they might take it personally.” “Yeah.” “Do you care about that at all?” “No.”

And that was just part of Irving’s criticisms of LeBron. After that, he said “There is no time to figure out how to save someone’s feelings when ultimately you have to be selfish in figuring out what you want to do.” (0:40).

Kyrie Irving is a savage ? pic.twitter.com/C2tdV2tH3H

When asked “Kobe or LeBron,” Irving said in terms of favorite players, he’d choose his dad and then Kobe:

And when asked if he could win a championship without LeBron, Irving first said “Time will tell,” then “Oh, absolutely” when pressed on what he believed:

Can you win a championship without LeBron? @KyrieIrving: pic.twitter.com/kQmnwy09eU

Irving also went in on Kellerman for repeatedly asking him about LeBron:

“I made a decision as a man, and as a man over there, Max Kellerman, just respect it and leave it alone.”

But the even more notable event may have been the way Irving constantly avoided questions, which spurred plenty of Twitter reactions:

Kyrie Irving dancing around these questions on #FirstTake like… pic.twitter.com/lFubzVRqBG

This @KyrieIrving / @maxkellerman awkwardness on @FirstTake got me like: pic.twitter.com/mgIXiq3ha7

Max Kellerman was really trying to do his job professionally and Kyrie was just basically mocking him. Max looked so mad

So, yeah, that’s one of the more unusual First Take segments in a while. And this time around, it’s not because of Smith and Kellerman.