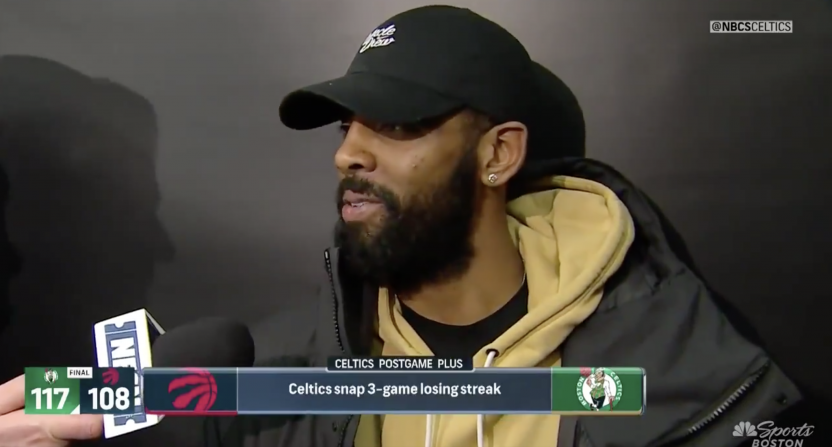 Everyone does stupid things when they were younger, you just hope it’s not too bad and that you learn from your past and change for the better. When Kyrie Irving started his career with the Cleveland Cavaliers, he felt he was the star and leader of the team. But when LeBron James signed with the team, he had to step aside while LeBron lead the team to a title.

Eventually, Irving left the Cavs to sign with the Boston Celtics. And now that LeBron is with the Lakers, both people are trying to lead their respective teams to prominence.

While in Boston, Irving has had to lead many young teammates and maybe that sparked some past memories when he was in their shoes. That maybe he was a bit too hard on LeBron when he was just trying to make the team better. Irving revealed Wednesday night that he recently called LeBron to talk about leadership and apologized to him for how he acted as a teammate.

📹 Kyrie explains why he called LeBron James after finally understood what being a leader is all about pic.twitter.com/oZsXKIMeSq

Irving said, “I’ll tell you one thing, and obviously this is something that, it was a big deal for me because I had to call ‘Bron and tell him, like, ‘I apologize for being that young player that wanted everything at his fingertips, and I wanted everything to be at my threshold, I wanted to be the guy to lead us to championships, I wanted to be the leader. I wanted to be all that and the responsibility of being the best player in the world and leading the team is something that’s not meant for many people.’ ‘Bron was one of those guys that came to Cleveland and tried to really show us what it was like to win a championship, and it was hard for him. And sometimes getting the most out of the group, it’s not the easiest thing in the world.”

“Like I said, only few are meant for it or chosen for it, and I felt like the best person to call was him because he’s been in this situation. He’s been there with me where I’ve been the young guy, of being the 22-year-old kid wanting everything, wanting everything right now, coming off an All-Star year, starting, then this heck of a presence comes back and now I gotta adjust my game to this guy. You take it personal, but at the end of the day, he just wants what’s best and he has a legacy he wants to leave, and he has a window he wants to capture, so I think what that brought me back to was, like, ‘Alright, how do I get the best out of this group, the success they had last year, and then helping them realize what it takes to win a championship?’”

It’s some notable personal growth for Irving to realize what he did and apologize for it. It’s kinda like the teenager who never listened to their parents and then when they got older, realized that they were actually right all along. In addition, it’s possible that by publicly revealing this story, it’s a subtle call to Kyrie’s younger Celtics teammates to listen to him because he certainly knows what it’s like and just wants the team to be successful.