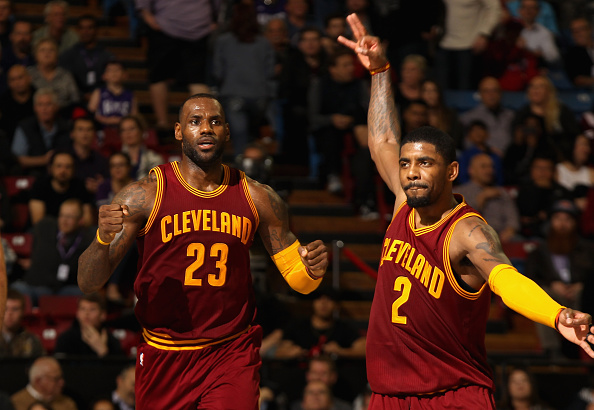 To say the 2015-16 season has been a soap opera for the Cleveland Cavaliers may be the largest understatement of the NBA season. Between subtweets galore, an awkward trip to Miami, and plenty of talk of LeBron James unfollowing the Cavs on Twitter, it has been drama central on the shores of Lake Erie.

Despite it all, many are shocked to see the Cavs sitting in the drivers seat in the Eastern Conference, 2.5 games ahead of the Toronto Raptors for the top seed with seven games to play. Yet, that’s exactly where the team sits as it heads in to the home stretch of the regular season.

Many believe the drama will eventually catch up to the team, just don’t tell that to guard Kyrie Irving though. He still believes his Cavs are going to make a deep run the NBA playoffs.

“I feel like we’re the team to beat,” Irving said. “I mean, honestly, it’s open season until we get into the playoffs, so I have a lot more confidence than I think anyone realizes in our team and what’s going on in our locker room.”

Irving isn’t alone in that belief though, as LeBron also echoed his teammate’s statement this week.

“I think we’re all confident in our ability when we’re playing at a high level,” James said. “We want to continue to use the games to continue to get better as the postseason starts if we can and make a run at it.”

Critics also will point to a turbulent March, as the Cavs finished the month with an 11-5 record, losing to an injury-ravaged Memphis Grizzlies team as well as a Brooklyn Nets side that’s better than only the 76ers in the East.

For his part, Irving has had his own off-court drama to deal with as of recent. He acknowledged a breakup with R&B singer Kehlani. But, given all he has been through in his life this seems rather minor, and his play as of late suggests just that.

On Thursday, Irving managed to score 10 points despite dealing with an illness and a 4-of-14 night from the field.

Much of the trick behind all of this is apparently the internal focus of this team, including its leader, James.

“For me, I don’t get caught up in it too much, because I don’t listen to it or hear or watch it. I don’t really watch any sports with the volume up. I think how you want to approach it and how you want to be perceived or whatever the case may be, but we’ve had a damn good season to this point, and we want to continue that.”

The talk is good coming from a team with plenty of outside factors and internal mistakes trying to take down what anyone in any other season but this one would call a very good season.

However, with a multi-NBA championship winning leader and plenty of All-Star talent around, this team will always have sky-high expectations around its performances.