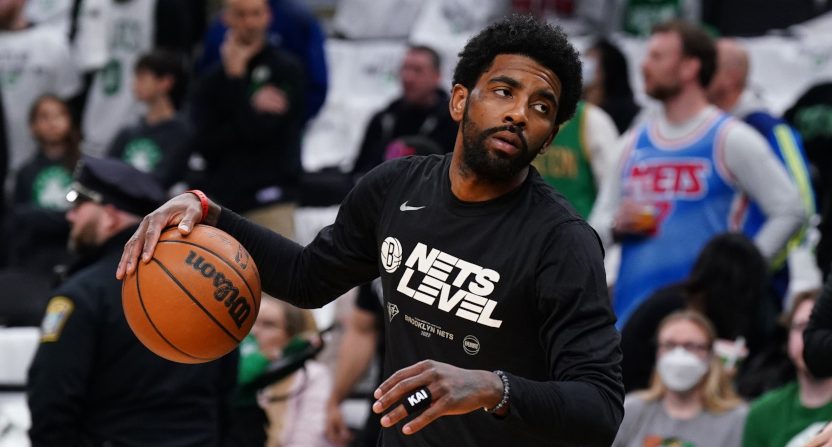 Heading into Game 1 of the NBA’s Eastern Conference quarterfinals matchup between the second-seeded Boston Celtics and seventh-seeded Brooklyn Nets Sunday (which Boston won 114-113 on a last-second shot from Jayson Tatum), much of the talk was about how former Celtics’ player Kyrie Irving would be received in Boston. Yes, Irving had played in Boston since leaving the Celtics for the Nets in free agency after the 2018-19 season, including in a first-round playoff series last year (second-seeded Brooklyn won that series 4-1), but his returns there still come with a lot of discussion, especially around his comments on Celtics’ fans. And Irving (seen above warming up ahead of Sunday’s game) was booed throughout this game (in which he posted 39 points, six assists, five rebounds and four steals), and he responded at one point in the fourth quarter by flipping fans a double bird behind his head:

Kyrie is so creative, he can flip the double bird behind his head pic.twitter.com/J0mmAw7i47

Kyrie going to get fined a full game salary w all his antics this game 😂 Kyrie HATES Boston 🖕 pic.twitter.com/fhwRMuZX0Y

This came after an earlier single bird:

Kyrie flipping the bird to the fans in Boston pic.twitter.com/5v0bHjxg2Y

Irving also appeared to yell “Suck my dick, bitch!” in response to a “You suck!” line from a fan earlier when he was walking to the locker room:

(That particular “Suck my dick” expression is a recurring one for Irving, who was fined $25,000 in 2017 for telling a Philadelphia 76ers fan the same thing.)

Here’s what Irving said afterwards on his reactions:

Kyrie Irving: "When people start yelling pussy and bitch and fuck you, there’s only so much you can take as a competitor…Nah fuck that, that's the playoffs, it is what it is. I know what to expect in here and I’m ready to give the same energy back to them." https://t.co/AIhGfqNsRK

On flipping off the fans, Kyrie Irving said it's the playoffs and if a fan is going to throw that energy his way he will throw it back. Asked on the hate he gets in Boston: "Embrace it. It's the dark side. Embrace it."

It is also at least funny that his head coach, Steve Nash, said there wasn’t any atmosphere that could rattle Irving:

Steve Nash on Kyrie Irving's performance vs. Boston: "I don't know if there's any atmosphere that'll really rattle him" pic.twitter.com/oVyQ1PS1Ds

Irving certainly delivered a great on-court performance Sunday, but he also made some headlines for his reactions towards fans. And it will be interesting to see if the NBA fines him again over that, and if so, for how much.