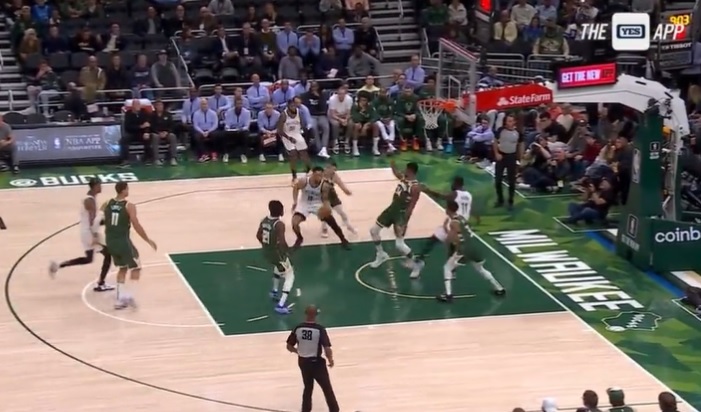 The drama around the Brooklyn Nets seems neverending.

A roster featuring Kevin Durant, Kyrie Irving, and Ben Simmons fell to 1-3 after a 110-99 loss to the Milwaukee Bucks on Wednesday night.

Simmons scored just four points on 2-of-7 shooting from the field. He did dish out nine assists, but there are times when the 2016 No. 1 overall pick needs to be more aggressive instead of just being a distributor. And there was an example of this during Wednesday’s game that frustrated Irving.

In the third quarter, Irving set Simmons up for a close-range shot in the paint. The 6’10” point forward instead passed the ball back to Durant on the perimeter, and Durant took two dribbles before making a jumper.

A frustrated Irving threw his arms in the air and yelled, “Shoot it, Ben!”

Kyrie Irving thought he was setting up Ben Simmons for the bucket, but Ben got KD a bucket instead 😅pic.twitter.com/LMMr2Gzcf4

It worked out, but Simmons — and any NBA player, especially ones that are 6’10” — needs to be taking shots like this (he may even be able to dunk it if he goes up strong).

Simmons sat out the 2021-22 NBA season while dealing with physical and mental health issues. He was traded from the Philadelphia 76ers to the Brooklyn Nets as part of a blockbuster deal that sent James Harden to Philadelphia.

In four games with Brooklyn this season, Simmons is averaging 5.3 points, 7.5 assists, and 5.8 rebounds.

To be a serious contender, the Nets will need Simmons, Durant, and Irving to form a three-headed monster. That will require Simmons to be much more assertive on offense and be productive as a scorer.