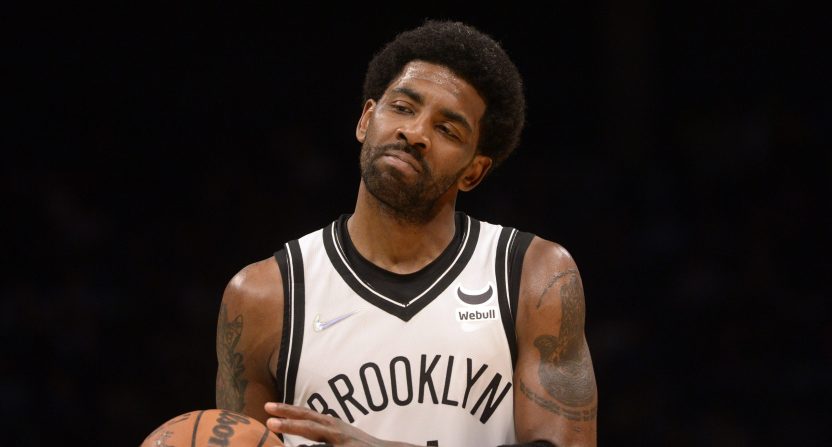 The Brooklyn Nets will definitely not be winning a NBA championship this year following their first-round sweep at the hands of the Boston Celtics, but a couple of them are seemingly trying to win a posting championship. The repeated pushback from Kevin Durant against media figures isn’t that surprising, as Durant has long known for his social media wars with media, commentators, other former athletes and more. But it’s interesting to see Kyrie Irving (seen above in a March game) getting in on that a little more than he has in the past, and doing so with a very wide shot at reporters:

Just Watch all of the people who wake up everyday and report about people’s lives on TV and social media, and then profit off of them. Then they justify their jobs by saying they get paid to say how they feel. 🤷🏾‍♂️

Lol Its like these people live in a Fantasy

And he went on from there:

I send shots at the puppet masters, not the puppets. All puppets do is run around society, trying to gain popularity and state opinions. What a life! 🤷🏾‍♂️

My name is worth billions to these media corporations. My brothers and sisters who deal with this know exactly what I mean.

When you become free mentally and spiritually, there is not much this twisted/Racist society can surprise you with.

My ancestors left behind all of the wisdom and truth for their agenda to be exposed. When you know exactly who they are, they can’t hide from their filth. pic.twitter.com/I9yGbg4Elf

Of course, Irving has had his own media dustups, and has been repeatedly fined for skipping press conferences. But unlike Durant, known for his tweeting (to the degree he vowed he’s never deleting his account this week), Irving doesn’t tweet that much. So seeing him go on a multi-tweet rant like this is something.

As per the substance of his tweets, Irving’s name alone is certainly not worth “billions” to media corporations, considering that the NBA’s entire current U.S. TV contracts for all live games are worth an estimated $2.6 billion annually (and that itself a massive increase over where it was). His “puppet masters” comment alone is also curious, as if critical coverage of the high-profile Nets’ first-round playoff exit only exists because of executives’ instructions. And his use of “report” seems flawed, because much of the commentary he’s complaining about makes it clear it’s opinion rather than reporting. His analysis that people criticizing the Nets indicates a “twisted/racist society” also feels like a leap.

But Irving’s said plenty of controversial things before, and he’ll likely do so again. The biggest change here is him taking to Twitter for some repeated tweets on this, something that’s much more in the line of what we’ve seen from Durant. And it will be interesting to see if other Nets follow suit.