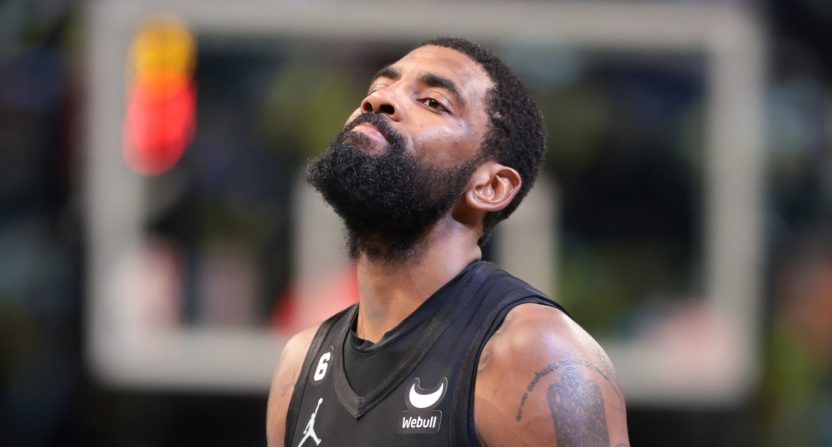 For much of this week, it’s been reported that Brooklyn Nets’ guard Kyrie Irving could return from his team-issued suspension as early as Sunday’s home game against the Memphis Grizzlies. The team handed Irving an indefinite suspension (but one of at least five games) Nov. 3, a week after he promoted an antisemitic film on social media and initially refused to apologize, only issuing an apology once he was suspended.

Sunday will mark the Nets‘ ninth game since their suspension of Irving (seen above during an Oct. 31 game against the Chicago Bulls), so that suspension has gone longer than many initially figured. But there was still some uncertainty remaining on Irving’s return thanks to the team’s checklist of actions he had to complete before returning. On Sunday morning, though, Irving put out a statement suggesting he was coming back.

To All of you that are standing next to me on this Journey I want to say thank you, I love you, and I honor your fearlessness and bravery. You motivate me more than you know. Now, Let’s build and celebrate one another
Hélà
🤞🏾♾

Then TNT’s Chris Haynes reported that Irving would play:

Brooklyn Nets star Kyrie Irving has officially completed all prerequisites — which included having conversations with several members of the Jewish community — and is cleared to make his return tonight against Memphis Grizzlies, league sources tell @NBAonTNT, @BleacherReport.

And Irving then started a press conference with a long “I meant no harm” speech, one particularly notable for his “there were some things that were misinterpreted and misunderstood in those comments” remark:

This is the full bit of how Kyrie Irving began his press conference this morning: pic.twitter.com/7TyMiaDnws

Irving on his previous press conferences: "I was rightfully defensive that there was an assumption that I could be antisemitic or that I meant to post the documentary to stand side by side with all the views of the documentary." pic.twitter.com/uM98vHj9bS

Irving was asked what his views were on the thesis of the film he posted – that Black people are the real Israelites. His answer: pic.twitter.com/wW4z1tZIWY

One of the items on the Nets’ checklist for Irving was “meet with owner Joe Tsai and lead franchise officials and demonstrate the lessons learned and that the gravity of the harm caused in the situation is understood, and provide assurances that this type of behavior will not be repeated.” The “misinterpreted and misunderstood” continued blame of others for Irving’s own decisions and remarks doesn’t appear to fit that, and neither does ‘I didn’t want to generalize harmfully Jews’ (promoting an antisemitic film and causing the related antisemitic book full of harmful generalizations about Jews to shoot up the bestseller charts certainly does that),  but it seems to be enough for the Nets to allow Irving to suit up again.

The Nets are 7-9 on the season, but 5-3 without Irving. We’ll see how they respond to his return to their lineup Sunday night.