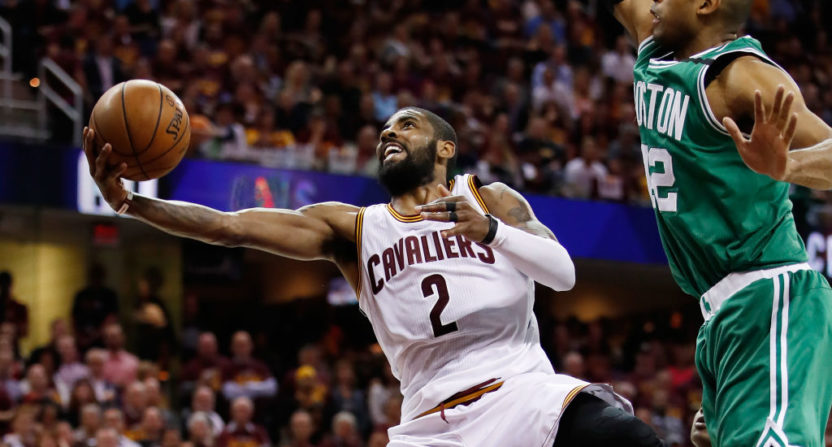 The Cleveland Cavaliers were in serious trouble Tuesday night against the Boston Celtics. After blowing Game 3 at home against Boston, the Cavs managed to come out flat in Game 4 as well, trailing by as many as 16 points at the 5:30 mark of the second quarter. To make matters worse, LeBron James incomprehensibly picked up his fourth foul late in the second quarter as well.

Everything was going wrong for Cleveland and it was easy to see panic setting in. Were the Cavs returning to their regular season form? Was Boston gaining supreme confidence and belief? Was there really a way the Cavs could blow this thing?

Then Kyrie Irving stepped in with one of the most sensational displays we’ve seen in recent playoff memory.

From the 5:30 mark in the second quarter until the end of the third quarter, Irving scored 33 of his career playoff-high 42 points. He led the Cavaliers from trailing 49-33 to leading 87-80 in that timespan. And he did so with a dazzling array of drives to the basket and lengthy three-point shots, and even inspired the crowd by overcoming rolling his ankle in the third quarter.

Irving’s ball-handling skills are unmatched in the NBA today and his ability to create shots for himself off the dribble is uncanny. There isn’t anybody who can stay in front of him and the way he’s able to contort his body and release of the ball opens up angles that should be impossible for the average player. Every time he drives to the basket through traffic, it’s a GIF in the making.

Just look at this crossover that makes Tyler Zeller looks like he’s learning how to ice skate backwards for the first time.

But it’s not just Irving’s ball-handling and driving ability, his range is out of this world as well. This deep three at the end of the third quarter was Curry-esque and the perfect cap to his one-man band performance that led the Cavaliers to their Game 4 victory that put them firmly back in control of the Eastern Conference Finals.

Finally, Irving sent the fans home with one more highlight in the final minutes with this feigned behind-the-back pass and drive to the hoop that’s straight out of an AND 1 mixtape.

KYRIE IRVING FAKE BEHIND THE BACK PASS pic.twitter.com/MRqEygs2wY

This array of highlights show that when Irving is in the zone as he was Tuesday night, he’s the most entertaining player to watch in the NBA. His offense and arsenal of moves is simply electric and unlike the other major stars in today’s NBA. You could have made SportsCenter‘s Top 10 last night with 10 plays from Irving’s Game 4 theatrics and not even batted an eyelash.

Steph Curry and Klay Thompson can go on insane scoring runs with their pure shooting ability. Kevin Durant, too. LeBron James can simply overwhelm and overpower any defense that stands in his way. Russell Westbrook’s combination of speed and athleticism allows him to do things that we haven’t seen in decades like averaging a triple double for an entire season. But when Irving enters his Uncle Drew zone, he’s in a class all by himself when it comes to pure entertainment. With the crossovers, acrobatic drives, and-1s, deep three-pointers, and pull-up jumpers, Irving has the most diversified arsenal in the NBA.

During Tuesday’s game, there was a sense of suspense that kept building throughout the third quarter of what highlight reel play he could possibly do next. It’s not an argument that he’s better than the other star players mentioned above or more consistent, but Tuesday night’s performance was enough to bring anyone out of their seat whowasn’t a diehard Celtics fan.

Unfortunately, we don’t get to see Uncle Drew too often because Irving rarely has to enter takeover mode with LeBron James and Kevin Love on his team. And no, that Game 4 performance didn’t signal the passing of the torch from “LeBron’s team” to “Kyrie’s team.” This will be James’s team until he decides to retire, whenever that may be. However, when his team needed him most, Irving delivered with one of the best performances of his career. And he continues to show that once James does decide to hang ’em up, the Cavs should still be in pretty good shape with him leading the franchise.