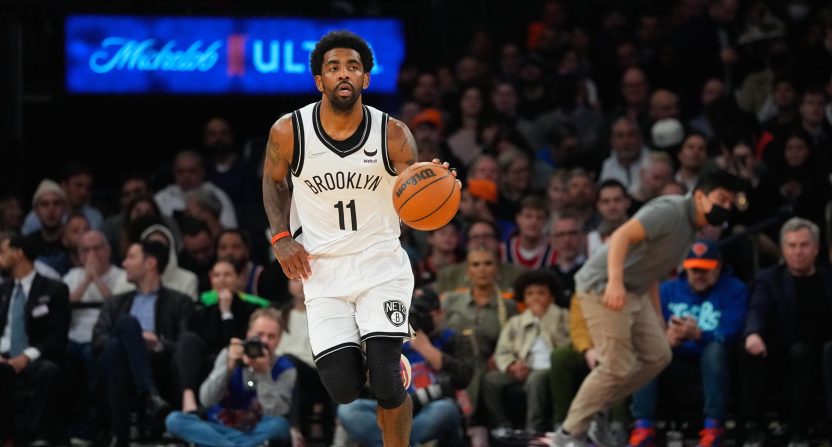 Kyrie Irving is no stranger to controversies and after some recent social media activity, the Brooklyn Nets star has put himself into another one.

Kyrie Irving just posted a video clip entitled “Never Forget – Alex Jones Tried To Warn Us” with Jones claiming back in 2002 that a “New World Order” would release “plagues upon us…” pic.twitter.com/sz2Ps7Fbrn

Jones just lost a lawsuit against the parents of the children murdered in the 2012 Sandy Hook massacre, which Jones said never happened.

Jones is known to be a huge supporter of former President Donald Trump supporter. And, given that this video from Jones is 20 years old and was released 10 years before Sandy Hook, it’s clear that his conspiracy theories didn’t start there.

Irving missed part of the NBA season last year because he refused to take the COVID vaccine and he has spread misinformation about the vaccine and its effects on people.

He also has said in the past he believes the earth is flat, so it may not come as a shock to anyone that he would post something from Jones’ website.

NBA fans shared their thoughts on Irving through social media and most of them thought that Irving was off his rocker again.

Kyrie Irving refused to be vaccinated, which meant he couldn’t play in Nets home games last season. That certainly didn’t help his team, which underperformed significantly. Not surprised he is an Alex Jones fan.

Kentucky basketball legend and former NBA player Rex Chapman says if Irving is somehow connected to Alex Jones in other ways, he is done with Twitter.

If we find out through Alex Jones’ phone that Kyrie Irving has been communicating with Alex and Steve Bannon and Peter Navarro and Roger Stone Im gonna have to quit twitter.

Irving may want to watch what he says, he may be skating on thin ice with not only the Nets but the NBA.