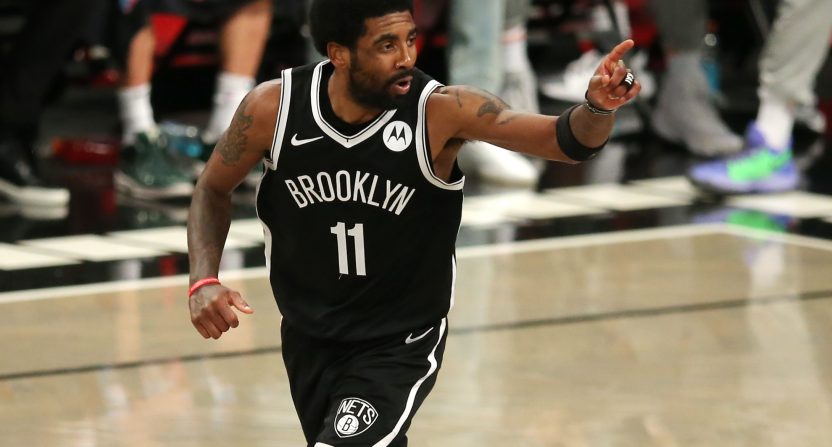 Kyrie Irving returned to the Brooklyn Nets earlier this month after the franchise decided to allow him to play again. Irving is currently only allowed to play in road games outside of New York City and Toronto due to his unvaccinated status with COVID-19 protocols.

That could be changing very soon. According to Adrian Wojnarowski, there is “real optimism” within the Brooklyn Nets organization that Irving could be a full-time player for the Nets at some point this season.

Here are some reactions around the NBA to the news.

Is James Harden still holding out hope that Kyrie Irving can play at Barclays Center?

"I'm gonna give him the shot" pic.twitter.com/1tupopQFpT

Nets when it reaches paying $5,000 fine for Kyrie Irving to play at home: pic.twitter.com/VZNQYlXqXl

If I am the @BrooklynNets , I would just pay the fine each game for Kyrie Irving to play every home game for the playoffs. The max payment they would have to pay would be 68k. People would be emotional about it but I wouldn’t care.

There are a few scenarios where this could happen for Brooklyn.

First, Irving could get vaccinated, which seems like the least likely considering how long he sat out of this season due to his refusal to get vaccinated.

Kyrie Irving could be available in Nets home games if Brooklyn is willing to pay a ‘small fine’, per @SBondyNYDN

As of now, Wojnarowski says that he thinks it is unlikely that the Nets would do this, but they were also the team that said they wouldn’t allow Kyrie to play in the first place. The last possibility for Irving is for the NBA to lift COVID restrictions at some point this season.

With so many players testing positive for the virus the past few months, this also seems like something that won’t happen this season.

This situation could simply come down to how much does the Brooklyn Nets organization wants to win a championship right now. It seems like the Nets deciding to pay the fines for home games would be the most realistic solution.

Wojnarowski did report that this would depend on the New York State regulations, as teams still need to comply with their state laws for players to be able to play despite the fine.

To be clear on the hypothetical ability for a team to pay a fine for an unvaccinated player to play in a marketplace that local ordinances forbid: NBA memo to organizations on September 1 says that teams must follow local laws and players who don't comply won't be able to play.