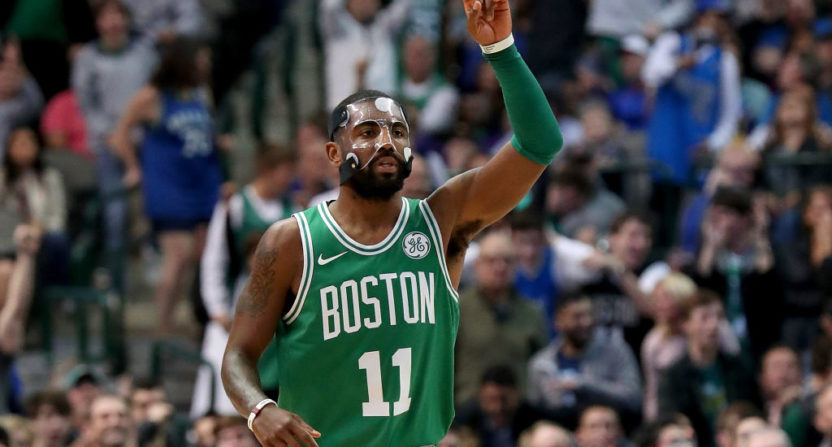 February’s comments from Boston Celtics’ guard Kyrie Irving about the Earth being flat sparked a whole lot of controversy, with teachers bashing how his comments got their students to doubt science, other NBA figures joining in (even if some later said they were trolling) and even Celtics’ GM Danny Ainge tweeting “maybe the world is flat” after Irving scored 47 points last month. Irving said he was trolling in September, but did so in a bizarre word-salad interview on Boston radio where he didn’t admit the earth was round, and went on Geno Auriemma’s podcast last month to make some more odd claims like “there is no real picture of Earth” and arguing that everyone should “wake up and do your own research.” And that latter comment is now symbolized by an all-seeing eye symbol on his new Kyrie 4 shoes:

The new Kyrie 4 also features an "All Seeing Eye" icon behind the tongue, meant to "challenge everyone to seek their own answers beyond the ones that are given to us by books, media, internet, etc." pic.twitter.com/l4zrOmKJQJ

When you consider what Irving told Auriemma along those lines last month, it sure sounds like he hasn’t given up on the flat-earth idea, or on challenging the masses of scientific data that tell us the earth is round:

“The separation that I can’t stand is because I think one particular way … then there’s a tirade of comments of who I am character-wise,” he said. “The only intent was for people to open up and do their own research. It wasn’t to, ‘OK, let me figure out and go against science. Let me go against what I’ve been told is right, and all this stuff.’ The only intent was just to wake up and do your our research.”

“Instead of just assuming something that’s been told to you — because I’ve been told a lot in terms of my history, and facts and particular facts, and it’s been completely false,” he continued. “I just wanna open up and have that conversation. I wanted to just ask other individuals, like do you really think this actually happened? I just wanna know. Because I don’t know either.”

And now, Kyrie’s new Nikes are encouraging everyone to “seek their own answers.” Middle-school teachers everywhere must be thrilled.