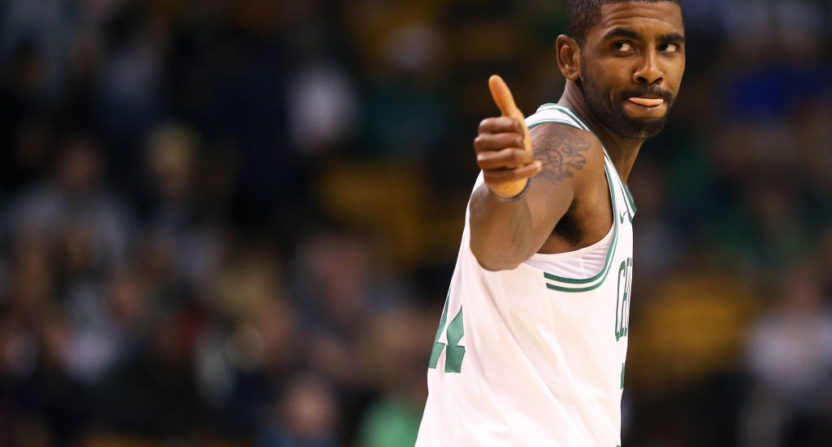 In a surprisingly understated tweet, the Celtics today announced that Kyrie Irving was undergoing a surgical procedure on his balky left knee.

That calls to mind the old joke that the only minimally invasive procedures are those done to someone other than your favorite team’s star point guard.

If you’re looking for more information, the team’s release wasn’t exactly forthcoming. Here it is in its entirety:

The Boston Celtics announced today that guard Kyrie Irving will tomorrow undergo a minimally invasive procedure to alleviate irritation in his left knee. Further information will be provided following tomorrow’s procedure, and the team will have no further comment until that time.

So there’s that! Rather than assume the worst, it’s probably best to assume Kyrie will be back for the playoffs, which start in the middle of April. That’s 2-3 weeks from now, a reasonable recovery window for a minor procedure. The Celtics are currently 4.5 games behind Toronto for first in the East, and they hold a 6 game lead over Cleveland. This procedure feels like a white flag on chasing the top seed in favor of having a healthier Irving for their playoff run.

And that’s interesting mainly because it solidifies the top of the East. ESPN’s Zach Lowe pointed out as much right after the surgery was announced:

Depending on timetable, will be interesting to see how teams 3-8 in the East right now approach playoff seeding. https://t.co/50OLY5yTlp

That’s because now that Boston is essentially locked into the 2 seed, with Toronto in first, teams in the middle of the pack (or even at the top) can try to decide who they’d rather play. Would you rather be 7th and face Boston with (presumably) a healthy Kyrie? Or 8th and face Toronto, better all season but maybe not as scary for the playoffs? And then teams in the middle of the pack have to decide whether they’d rather face Boston or Toronto in a potential conference semifinal match as well. It could mean some, uh, jockeying/tanking down the stretch.

Yet another wrinkle that keeps the Eastern Conference more interesting this year than we’ve seen for some time. Hopefully Irving makes a quick and full recovery, too.