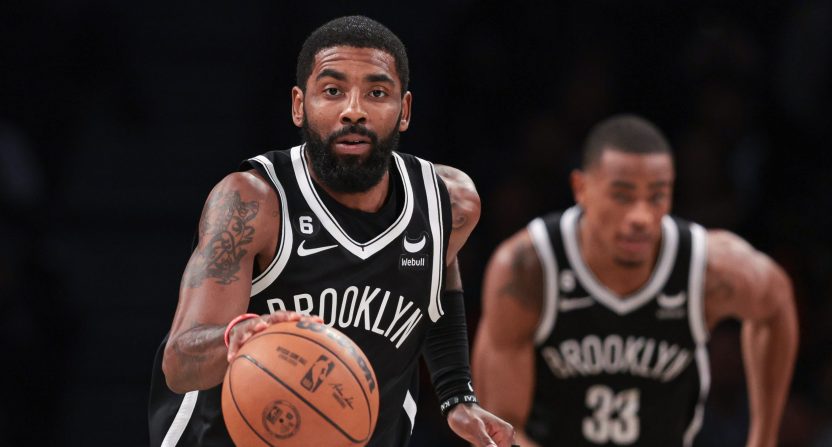 One week after Kyrie Irving shared a controversial film with antisemitic messaging, the Brooklyn Nets are suspending him.

Adrian Wojnarowski of ESPN broke the news if Irving‘s suspension on Thursday evening.

The Nets have suspended Kyrie Irving.

The Nets also released a statement a statement on the suspension. The statement indicated Irving’s press conference on Thursday was the final straw.

“We were dismayed today, when given an opportunity in a media session, that Kyrie refused to unequivocally say he has no antisemitic beliefs, nor acknowledge specific hateful material in the film. This was not the first time he had the opportunity – but failed – to clarify.

The statement also said that “We have decided that Kyrie will serve a suspension without pay until he satisfies a series of objective remedial measures that address the harmful impact of his conduct and the suspension period is no less than five games.”

Statement from the Brooklyn Nets pic.twitter.com/699px8XYpx

The reaction to the suspension was generally positive. For several in the NBA world and other fans, one of the major prevailing questions was, what took so long?

I guess not apologizing the third time was The Line. https://t.co/939dIwvqKI

Why did it take so long? https://t.co/eLcEeChOa9

Candace Parker and Jamal Crawford react to Kyrie Irving being suspended by the Nets for a minimum of 5 games without pay.

"They say minimum… are they going to wait until he apologizes?" pic.twitter.com/2rNI1Dv9ZD

The Nets basically gave Kyrie five "You sure?" opportunities and he was always sure https://t.co/yb4Yz7uqpF

Seriously. Have we ever seen this big of a cluster in sports before? Reaching White House (last two admins) levels of absurdity https://t.co/WRolWkeMk6

Given every opportunity — too many opportunities, if you ask me — to simply apologize, Kyrie couldn't bring himself to do it. Now he's gotten suspended and he'll act here like he has in previous instances: like he's a martyr. https://t.co/pU5PNFBoLf

Both the NBA and the Nets released widely criticized statements denouncing antisemitism shortly after Irving posted the video. In that time, he was permitted to play, not suspended with pay or even just benched.

But commissioner Adam Silver didn’t get particularly critical of Irving (at least in public) until shortly after his press conference on Thursday. That response came shortly before Brooklyn’s decsion to suspend Irving.