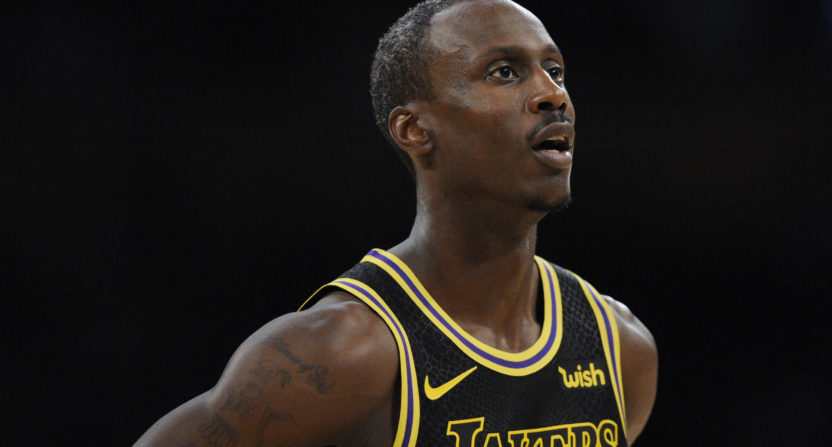 32-year-old rookie Andre Ingram made his surprise NBA debut on Tuesday night at Staples Center, and he certainly made the most of the opportunity.

You stay on the grind and at the end of your 10th year, you finally get the call.

Ingram — a 10-year, 384-game G League veteran — scored 19 points in 29 minutes against the Houston Rockets, and did so with lights-out shooting. The American University product hit 6-of-8 shots from the field, 4-of-5 from behind the arc, and 3-of-3 at the free throw line to reach 19 points in highly efficient fashion.

Ingram’s first shot was a three-pointer, and he nailed it:

A debut 10 years in the making…

After the game, Ingram was presented the game ball by Lakers head coach Luke Walton:

The game ball ? could only go to one person. Thank you for inspiring us all, Andre Ingram! #ThisIsWhyWePlay pic.twitter.com/4NwSUpUykC

And Ingram spoke with the Inside the NBA crew:

As @TurnerSportsEJ would say, this story is "good for the soul."

The #InsideTheNBA crew catches up with 32-year-old Andre Ingram after his @Lakers debut! pic.twitter.com/XfmZDLWvUg

The power of focus and persistence is real!! Congrats Andre Ingram on your NBA debut. Well deserved! pic.twitter.com/U1MY9F1LOI

32 year old rookie Andre Ingram gets some love from Chris Paul before he checks in for his first NBA game after 384 G League games ? pic.twitter.com/RNFbwYEVgX

Ingram will look to add another chapter to his incredible story in the Lakers’ season finale against the Clippers on Wednesday night.