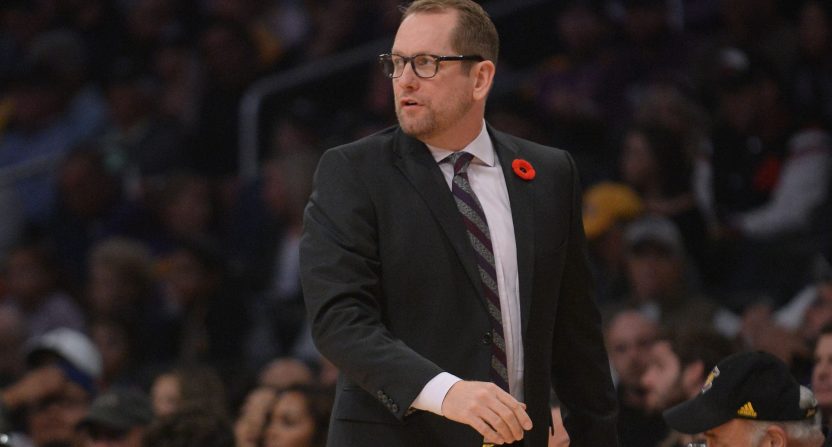 The Los Angeles Lakers were the most disappointing team in the NBA this season, missing out on the NBA playoffs for the second time in the past four seasons with a 33-49 record.

The struggles were evident from the start with some clear chemistry issues surrounding newly acquired point guard Russell Westbrook. Things got even worse when stars Anthony Davis and LeBron James missed a number of games throughout the year with significant injuries.

It was too much to overcome and the disaster of a season that resulted in the team reportedly firing head coach Frank Vogel on Monday.

Vogel’s three seasons with the Lakers featured the highest of the highs and the lowest of the lows. The team won the NBA championship in the 2019-20 season in his first year as head coach, but progressively got worse in the years since, winning just 41 games and then 33 games.

It seems that the Lakers will now undergo an exhaustive search for their next head coach, but reports have emerged that they have a very interesting top candidate in mind already to replace Vogel. NBA insider Shams Charania reported on Monday that the Lakers’ top target is Toronto Raptors head coach Nick Nurse.

Nurse has been excellent during his tenure with the Raptors, leading them to a championship in the 2018-19 season as well as helping key players like Pascal Siakam and Fred VanFleet develop without stars like Kawhi Leonard or Demar DeRozan on the team any longer.

Nurse is currently under contract still with the Raptors for two more seasons, so the Lakers would need permission to speak with him, and likely need to offer compensation to Toronto in return if they did hire him away.

It remains to be seen if Nurse would even have interest in the job considering the Raptors’ success and the Lakers’ poor season, but it would surely be a great hire if they were able to convince him to come to Los Angeles.