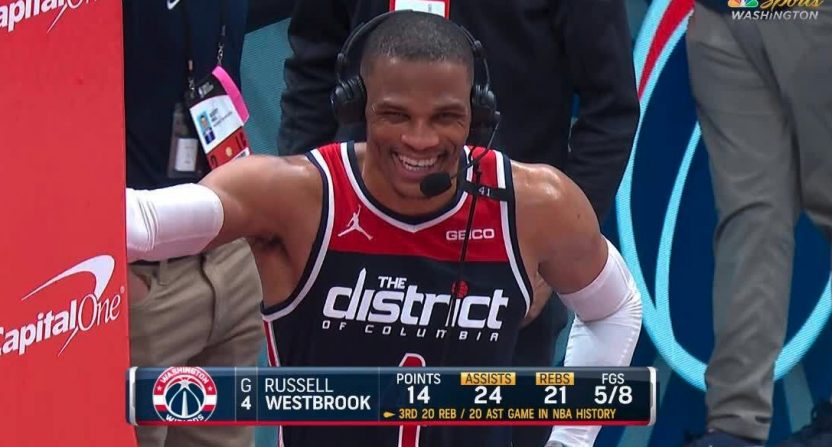 The Los Angeles Lakers have another star to join LeBron James and Anthony Davis in their quest for another NBA title. And Russell Westbrook goes from a team that barely made the playoffs to a championship contender.

On NBA Draft night, the Washington Wizards have a deal in place to trade Westbrook and two second-round draft picks to the Lakers in exchange for the No. 22 selection in the 2021 draft, Kyle Kuzma, Kentavious Caldwell-Pope, and Montrezl Harrell.

Adrian Wojnarowski announced on ESPN that both teams agreed to the terms of the trade, while The Athletic’s Shams Charania had the exact details on Twitter.

Westbrook averaged a triple-double in his only season for the Wizards with 22.7 points per game, 11.7 assists, and 11.5 rebounds. It was the fourth time in the past five seasons that the veteran guard notched double figures in points, assists, and rebounds.

Related: How Russell Westbrook is putting up another triple-double season

During the 2020-21 season, Westbrook notched the first triple-double with 35 points and 20 points in NBA history and he achieved the 182nd triple-double of his career, breaking Oscar Robertson’s league record.

As veteran NBA reporter Marc Stein points out, this deal won’t be official for approximately a week. But the trade has been agreed to by both teams.

Official completion of a Westbrook-to-the-Lakers trade, like the recent Memphis/New Orleans trade, can't happen before Aug. 6 when the 2021-22 salary-cap year begins. As @JakeLFischer and others have noted, that gives time for the trade to expand beyond the Lakers and Washington. https://t.co/uI4vyAX0v3

For Westbrook, the trade to the Lakers is a homecoming. He grew up in the Crenshaw neighborhood of Los Angeles and played his college ball at UCLA.

The Lakers sacrifice depth and youth by trading Kuzma, Harrell, and Caldwell-Pope (who was also the team’s best three-point shooter last season). But Westbrook provides another scoring and playmaking threat who can take over some ballhandling responsibilities and helps open up the floor for James and Davis. And with LeBron set to turn 37 years old next season, the Lakers also likely see a limited window to win another NBA title.

According to Wojnarowski, Buddy Hield was nearly the guard who went to the Lakers instead. The Sacramento Kings would’ve received Kuzma and Harrell in return for a dynamic scorer and excellent three-point shooter. But the opportunity to add an all-around threat like Westbrook apparently enticed the Lakers to push forward with that deal, adding Caldwell-Pope and their 2021 first-round draft pick.

Westbrook, the 2017 NBA Most Valuable Player, has had the good fortune of playing with other stars during his 13 NBA seasons. Early in his career with the Oklahoma City Thunder, he played with Kevin Durant and James Harden. He later rejoined Harden with the Houston Rockets for the 2019-20 season. And last season, he shared the backcourt with Bradley Beal, who had the best season of his career, averaging 31.1 points.

Related: Bradley Beal is putting together video game numbers, has a ridiculous streak to start the season

This is a trade Washington wants to make with Bradley Beal in mind, creating some salary cap flexibility for the future to add talent around him, sources tell ESPN. The idea of returning to his Los Angeles roots has been appealing to Westbrook.

Beal may no longer benefit from Westbrook’s presence drawing defensive attention and setting him up to score. Yet according to several reports, he doesn’t want to follow his teammate out of D.C. The trade with the Lakers adds several players who can contribute. (Kuzma might enjoy the proverbial change of scenery, moving to a team where he can take a larger role.)

More importantly, the deal creates salary cap room that should allow the Wizards to find another star to play alongside their ninth-year guard. Beal has two years remaining on his contract and is in line for a max five-year extension after next season that could be worth $235 million (averaging $47 million per season).

Jackson was subsequently traded to the Indiana Pacers for guard Aaron Holiday and the No. 31 selection, which turned out to be 6-foot-10 power forward Isaiah Todd from the G-League Ignite. So the Wizards got a 6-foot-10 guy named Isaiah, no matter what.]